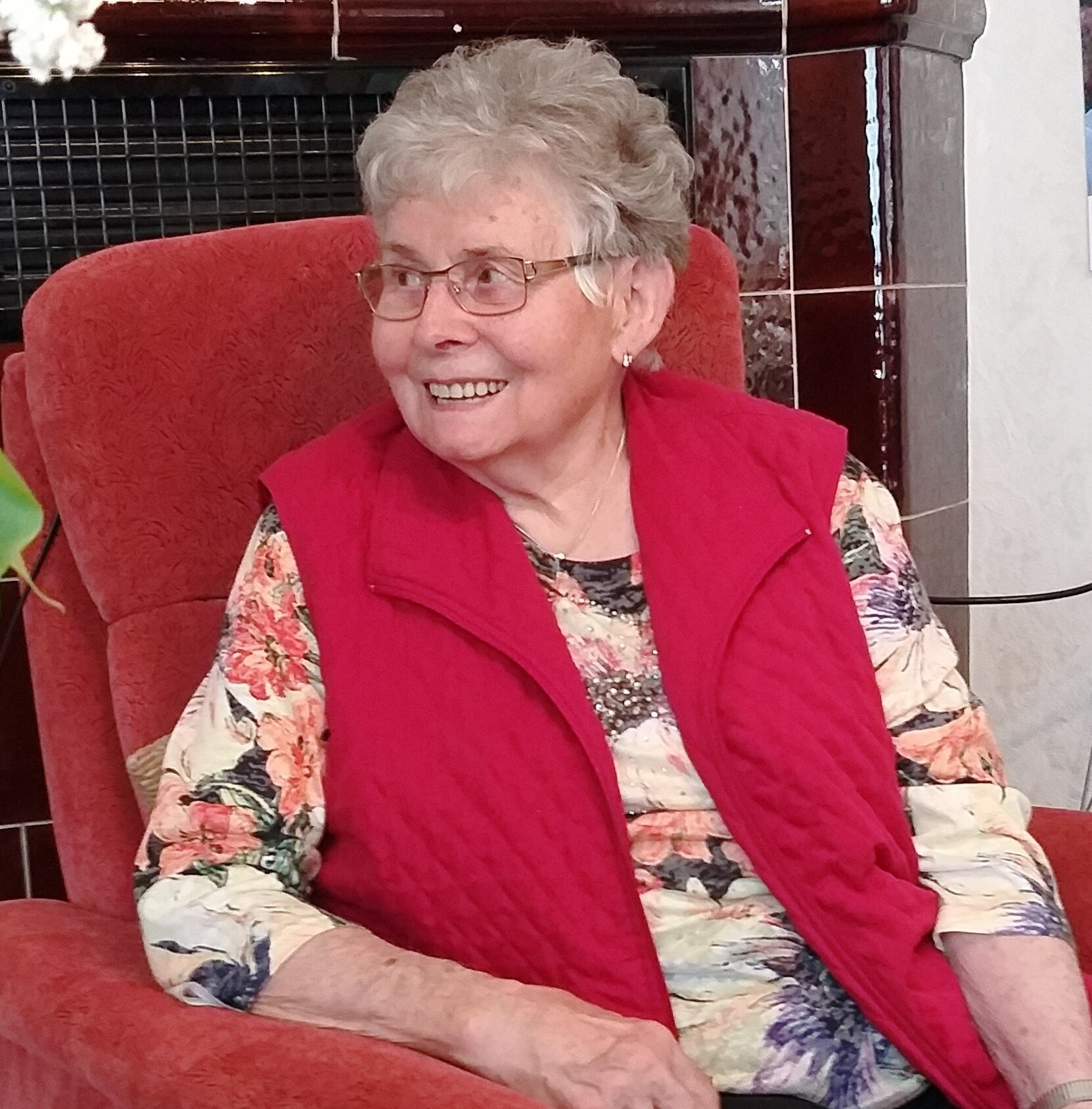 „Come on, let's go to the goud Stobb".¹, is how Marianne greets me when I meet her in the afternoon. There is a delicious eggnog cake on the table and an aroma of coffee fills the room. Before we start, we eat a big piece of the homemade cake and drink a cup of coffee, "then we'll be warmed up,"¹, she smiles at me. Marianne is a few days away from her 85th birthday; she lives in a village (about 3,900 inhabitants) in the Taunusareanear Limburg an der Lahn.

Marianne was born and raised in the village, where she still lives today; she was born in 1936 as the eldest child of four siblings (three younger brothers). Her ancestors did not originally come from farming; her paternal grandfather was a postman, her maternal grandfather was a master blacksmith. The family lived together with her paternal grandparents in a farming household -in the village it was common at the time for families to have a farm as a sideline. Her grandmother died early, when she was about 6 years old. She remembers that her grandfather Max was quite dominant in the family, he had a say in all daily matters and decisions, including the upbringing of the children. Her grandfather had given up his job as a postman at an early age, after which he was mainly a farmer and in addition looked after the village branch of the Nassauische Sparkasse. The savings bank was a cupboard in the living room and people from the village came on weekdays and also on Sunday mornings to deposit or withdraw money. Children brought their savings boxes. Marianne recounts:

"When I was about 9 or 10 years old, I was already told to "deliver money-for example, the salary for railway officials or teachers. My grandfather was sentthe money, and then he finished it off with a statement of account, it came in paper bags and I carried it to the people. Sometimes I got a few pennies as a gift. I liked doing it, but often I didn't have time to play with my friends. My grandfather also had the local church treasury, so the priest often came with the collection and paid it into the churchsavings account, all this always in the middle of the living room."

Family life was Catholic. Her father took over the farmafter the war. She helped out in the household from an early age; she remembers that she often looked after her younger brothers, together with her grandfather, for example in the afternoons when her parents were in the fields. For her it was normal, but she would also often have liked to play with her friends. There were also aunts and her maternal grandmother who helped on the farm,there were always a lot of people and therefore a lot of life in the house.

Marianne went to primary school -it was the war years -and finished after eight years. As the eldest and a girl, she stayed "at home" and worked in the household of the parental farm. The eldest brother did not want to become a farmer and did an apprenticeship -Marianne then prevailed upon her to do further training, which she completed at avocational school for domestic science. At home, she mainly worked in the household and on her parents' farm, while her mother went mainlyto the fields and took care of the animals. At an early age, she was able to cook and bake cakes on her own -to this day, baking cakes is a great passion of hers.

Starting a family -adult life -life as a farmer's wife

She met her future husband when she was still a young girl of about 16, in the classic way at one of the village dances. He was four years older than her and a farmer on his parents' farm, which was only a few streets away.

She recounts with a smile: "My parents and grandfather said that I was not old enough to go dancing ,even the local vicar once said to her: „You are far to young to have a boyfriend.At that time, my parents always went with mewhen I went to a dance -to watch out for me."

At the time when Alois was courting Marianne,he occasionally helped out on her family farm. She remembers further: "Since I mainly did a lot of housework at home, I had no experience with milking. Before I got married, I took a milking course to learn how to milk properly, which wasn't easy, but a farmer's wife-to-be should be able to do it properly."

Marianne got married when she was 21 years old, in 1957, the same year her parents moved from the village farm to a new farm as part of the consolidation of agricultural land around the new farm. This was a big event for the family. Marianne then no longer went to the resettlement farm; when she married, she moved in with her husband's family. She lived with her parents-in-law on the farm in the village.

Her first son was born a year later; her father-in-law died the year after 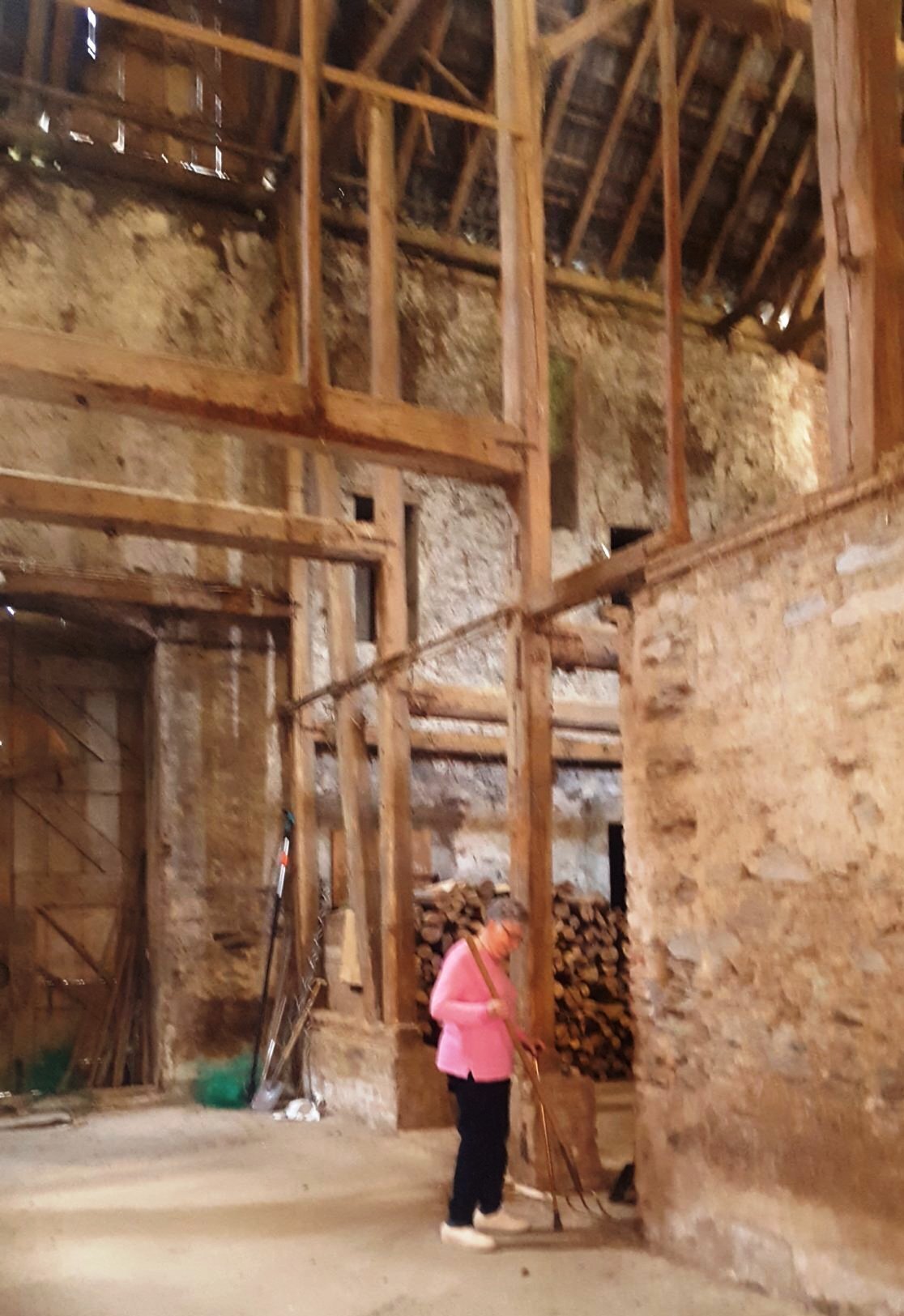 At the end of the 1950s/beginning of the 1960s, she went out into the fields a lot, e.g. to plant potatoes, which was still done by hand in a stooped position. When asked how she felt about this physical work, she said, "It was just the way it was, I was used to it.“ Later, they gradually became more advanced, acquired agricultural machinery and expanded the farm. While Marianna was in the fields or looking after theanimals, i.e. feeding, milking ormucking out the stalls, her mother-in-law was looking after the house and the grandchildren. Marianne has three children, and at intervals of four years each, another son and a daughter were born. Her father -who now lives on the resettled farm -and her siblings also helped with the harvest or when there was a need. Friends and neighbours also helped each other. "Mutual help was quite natural, working together together and being there for each other was always very important for all of us. Everyone was happy when a day's work was done and we celebrated it together by eating and drinking together.“

They didn't know how to take a holiday, "we couldn't do it during harvest time anyway, and we couldn't imagine leaving the animals, pigs and cows alone or giving them to othercaretakers,"she says. They found diversion in the village clubs. Her husband was very musical, he played the mandolin, was active in the mandolin club and in a brass band, and was active at the political level in the community. Marianne was involved in the countrywomen's association and in the Community of Catholic Women. The involvement and work in the clubs and in the village community was very nice and varied for us,and full of joy. she says. 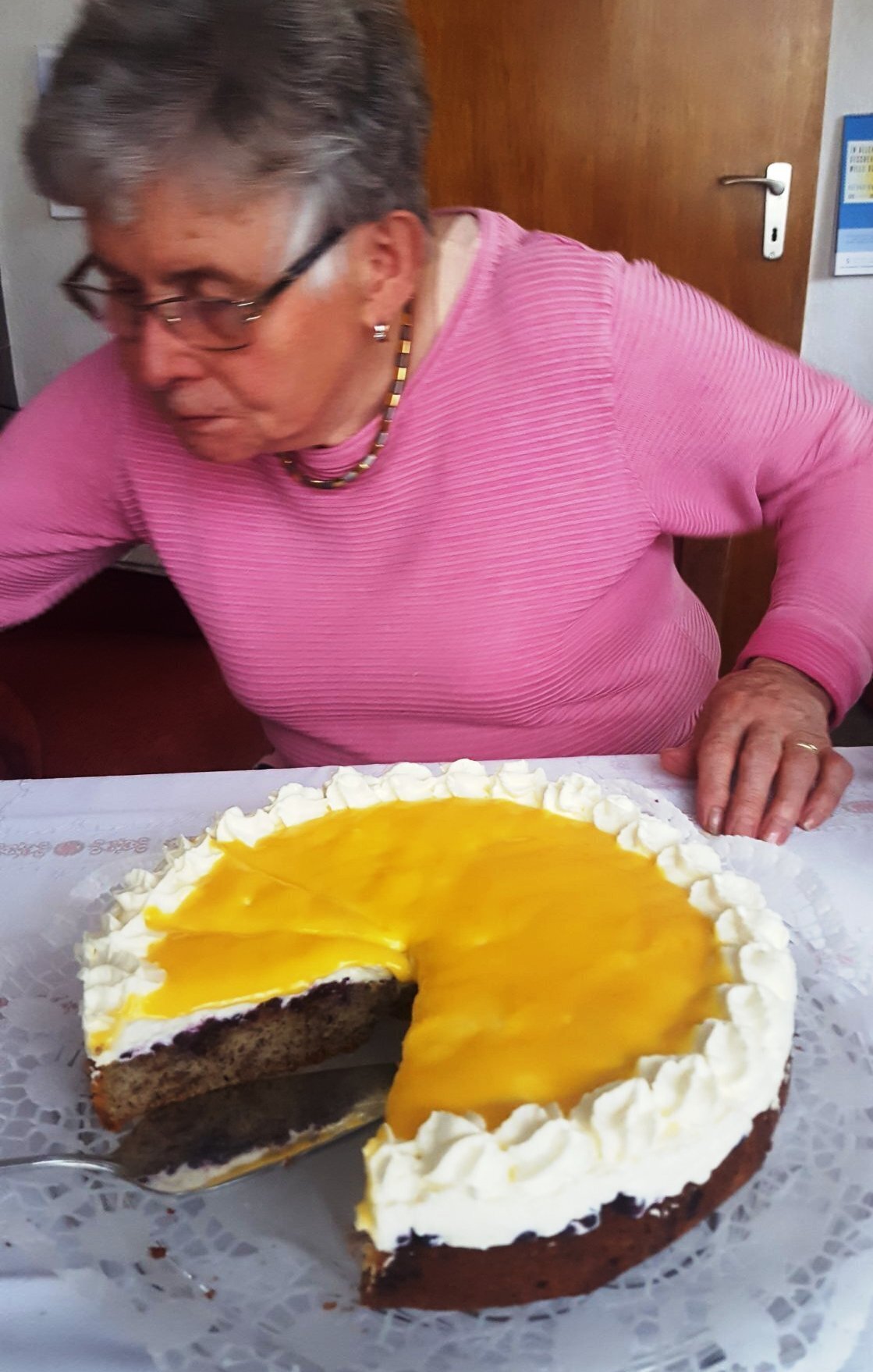 Midlife and the here and now

Over the years, the farm developed into a large business with many stables, a large barn and outbuildings. We kept investing in extensions and renovations.

"The days were filled with physical labour, but it was a very enjoyable time full of life. At all times we took part in festivals and celebrations in the clubs and the church, helped with the preparations and also went on walks, which the children also took part in. It was a fulfilling time, we did not miss holidays. When a baby calf was born, for example, that was an important event, we would never have gone away," she says firmly.

It was only later, when the children were older, that we went on day trips and much later on the odd club trip or city tour. Although both she and her husband had a rural background -and "only" completed primary school themselves -they made it possible for all three children to graduate from high school. Actually, the eldest son was supposed to take over farming, but he showed no interest early on and preferred to devote himself to music. All the children are very musically oriented. The eldest studied trombone and became a professional musician, the second eldest son had his school education with the Limburg Cathedral Boys'Choir and sang there for many years in the choir and went on choir tours. He studied teaching and still sings in a renowned theatre choir. The daughter plays the guitar and mandolin in a club; she studied law and works as a lawyer and notary public and isinvolved in community politics on a voluntary basis.

We have always loved and lived the village community; the bond with her siblings is very strong; they all have children and grandchildren and so a large family community with intensive cohesion and mutual help developed over the years. Also through the life of the associations and the village commitment, communities with great solidarity and also many celebrations and festivities on the farm were formed, whether countrywomen, singing association, fire brigade band or mandolin club, or round birthdays in the relatives, they all celebrated and made music together.

During the years 2004-2006, they slowly phased out the farm after her husband had increasing health problems and it was also obvious that none of the children would continue the farm. As they gradually had more free time, they were able to visit their two grandchildren in Koblenz more often and do and experience many things with them. They then also had the opportunity to go on one trip or another; these were often club trips.

Marianne's husband passed away in 2016. At the end of 2019, her eldest son died very suddenly at the age of 61. This was a big blow for her and the pandemic with contact restrictions that started shortly afterwards was very hard. 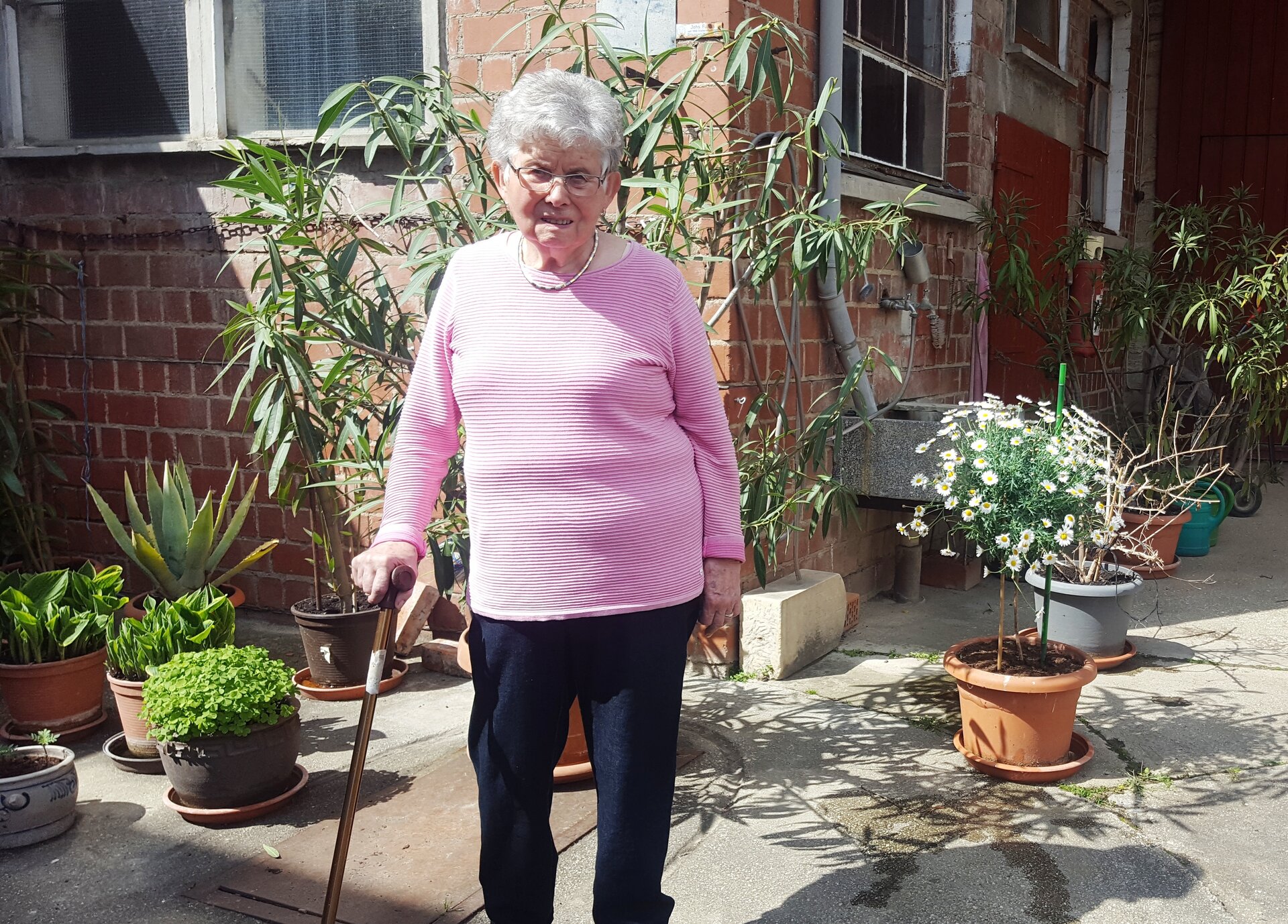 Today, Marianne lives on her ownin the farmhouse. She doesher daily household chores and still loves gardening. "I am not so good on my feet anymore, but I can still bend down well" -she tells me with joy and pride. She makes her daily rounds to the village, to the cemetery, to church, to the bakery etc. and meets up with friends. Before Corona, she still went to the gymnastics group, which she misses a lot at the moment. She reads the daily newspaper, watches TV and makes phone calls to keep in touch. Her daughter and husband live nearby; they take care of her where necessary. Her two brothers (the eldest brother has already passed away) also come regularly -"family cohesion is very important" she says in a firm voice -I don't feel lonely, but that's up to you.

"It's important to always have a good circle of friends -especially as you get older -because the older you get the thinner it gets, naturally it gets less and less."

"I haven't had an exciting life,but the community and cohesion with family, children and siblings and also friends was important to us and is important to me, it gives joy, the support of family is important when you have to deal with losses."

"I am grateful and happy for what I was able to experience, the memory is a beautiful gift and my faith and my religion give me support and comfortin difficult times. But, apart from the little aches and pains, I still feel well anchored in life.“

At the end of our conversation we take a tour of the stables and barn and the garden, there I can see for myself how she can still bend over.

In one of the stables the swallows fly back and forth, there are several swallow nests. Marianne is pleased and says:

"They always come back, -a sign that life goes on and on."

¹local dialect as spoken in the area