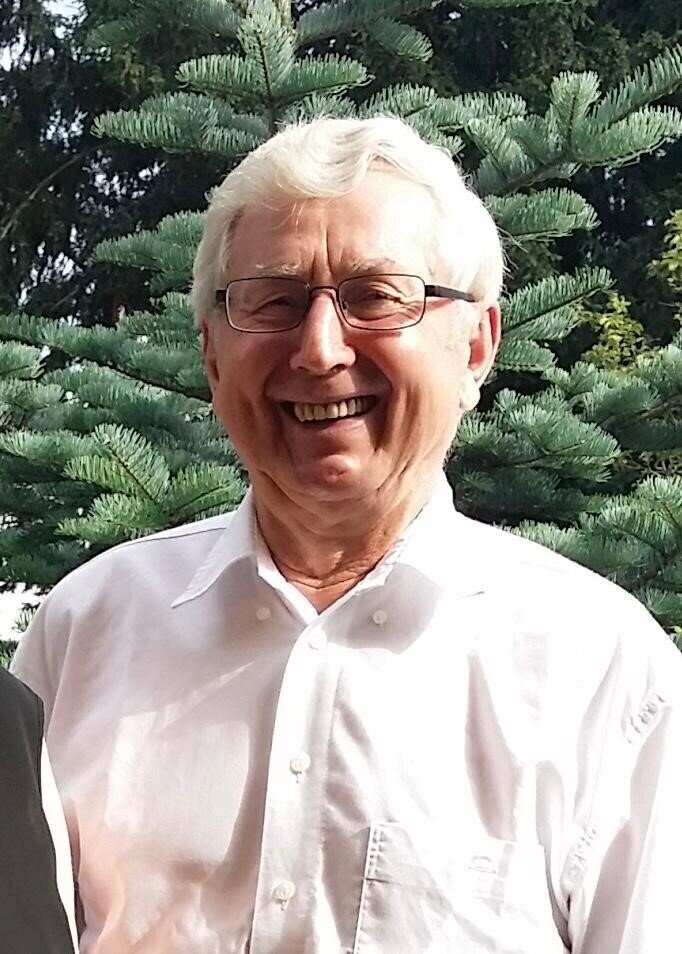 Shortly before the end of the war, his father died in Danzig. Thomas was 9 years old. A few days before, his father wrote a last letter with the words: "It won't be long now, then the horror will be over".

“Our mother lovingly took care of us 3 children but had to work all day so that we at least had something to eat. We lived in a small 2 room apartment with coal heating. The rent was 11.00 Ostmark. In this house the grandparents and cousin still live today. As the only boy, I then took over the role of father and went into the forest every day to collect wood so that we would be warm in the winter, because the winters in the Ore Mountains are very cold.

As children we played in the forest and searched for food given by nature and in the fields. There was no such thing as kindergarten or childcare. In 1942 in the middle of the war I started school. The school was about 3 km away. Since there was no bus connection and money was scarce, I walked this stony path to school and back home every day in wind and weather. Often even barefoot or with self-made plastic slippers. The teacher was very strict. Even for the smallest misdemeanors we were chastised with the cane. You didn´t get help or understanding at home. Mother said, "You must have done something wrong if the teacher was angry". Not wanting to burden mother, we accepted things as they were. The only consolation I found was in nature and in tinkering and carving with wood. A real passion developed from this. I created illuminated Christmas Crib figures and Christmas light arches to be placed in the windows as presents for the whole family at Christmas. With the tinkering also developed an interest in electronics.

After elementary school I changed to secondary school, which was 2 km further away. I also walked this way. On the way home, I searched the fields for food left over from the harvest.”

When I asked Wolfgang how he felt during this time, he says: "It was only bearable because the family stuck together, and we shared what little we had with the others. At that time, we were already something like a patchwork family.
A ration card was issued by the state and on presentation one would receive a few slices of bread and sausage, which were exactly counted. As a small sweet for 5 Pfennig, I sometimes bought some yeast.

I had a good relationship with my grandparents and learnt  a lot from my grandfather, he was a tinsmith by trade, and I helped him often. In return I got butter and jam as a thank you. My youngest cousin still lives in this house, and I remain in contact with her.
After graduating from secondary school at the age of 14, I started my apprenticeship as an electrician at the Kraus company in the nearest district town of Schwarzenberg. My boss appreciated my craftsmanship & reliability and took me to the electrical trade fair in Leipzig. Here my life took a positive turn. I built my self-confidence and performed in my job as well as possible so that my family would be better off later.

In 1945, after the end of the war, the next big disappointment came. The small house was confiscated. We were still allowed to live there, but we no longer had any say in the matter. Our family was practically tolerated, and I felt homeless. All plans of reconstruction or extension were therefore “thrown overboard”.

Job and Family
In 1957, a neighbor boy told me about Rüsselsheim and asked me if I would like to come with him to visit his father there. Another cousin of mine also wanted to visit an acquaintance in the West. Since almost all the boys here in the East were members of a military sports club, so that we had already done the driving licenses for motorcycle, car, and truck. The complete package cost 100.00 Ostmark.  And so, without further ado, we 5 boys decided at 1:00 o´clock at night to secretly drive away on our 3 motorcycles from home in the direction of the border. There at the border, we all had to hand over our passports and so Wolfgang became “Bernd”.  We received an inter-zone pass. Around 1:00 p.m., we arrived unharmed in Rüsselsheim. In our hometown, a missing person´s report is filed for 5 boys who are presumably on their way to the West.
Only one mother was “in on” our plans and so she was able to reassure the other mothers because she knew that we had arrived safely in the West. My friend's father took us in lovingly and we were able to stay there for the first while. My mother was devastated because now there was no boy in the house who could chop wood and make the fire. Fortunately, my sister Marlene got a job as a teacher in Freiberg and took our mother to live with her. There she started to really live again and helped the daughter with the housework and looked after the grandchildren when Marlene was at work. The younger sister worked for the embassy and was then able to move to Berlin.

Since I already had the truck driver's license, I started looking for a job as a driver. The truck driver's license from the East was only conditionally recognized here and so I only initially got a very poorly paid offer as a temporary driver and co-driver. But I was happy to earn at least some money. In 1958, I learned from a neighbor boy in Rüsselsheim that a large forwarding company in Darmstadt was looking for good reliable drivers. I get the job and am paid appropriately. From then on, things went uphill, and I was able to save up a nest egg. In 1963 the time had come; I fulfilled my dream of self-employment and founded my own small forwarding company in Griesheim.

In the beginning I only had a small 15-ton truck and later a 40-ton truck with a crane. From then on, I traveled all over Germany to construction sites and delivered building materials and removed building rubble. The order situation was good, I was on the road every day from 5 o'clock in the morning until 11 o'clock at night.”

When I ask him if it was not very strenuous, Wolfgang says:
“No, I really enjoyed the work.

In 1964 during a lunch break in Darmstadt I met my wife, Mia. She particularly caught my eye because she cared with much love for her plants in her small garden. I invited her to dance the following weekend and then the spark was ignited. In 1965, we got married with a very small circle of friends. I still had a big job to do that day and almost came too late to the registry office. I could not get a bouquet of flowers. An acquaintance gave me a bouquet on the street so that I would not be empty-handed. At this time, you had to be married to get an apartment.

We were very happy and delighted with our first little apartment of our own. In 1966 our daughter Gaby and in 1968 our son Frank were born.

Since I was continuously on a lot of construction sites, I found a cheap plot of land in a suburb of Frankfurt. The square meter price at that time was 18,00 DM. For me there were no such thing as Sundays and holidays, during the day I was driving trucks and earning money and in the evenings and on weekends I worked on the construction site for the house and to build a hall for the trucks. My own residential house was built mainly from building rubble. I unloaded and processed the stones that were still usable, only the rest went to the landfill. That was still allowed at that time.

There was almost no time for the family. Without my lovely wife, who had my back, it would not have been possible. Vacation and free time were foreign words to me. It was only when the children were older that we regularly went on winter skiing vacations to Schladming. We became passionate winter sports enthusiasts, and we are still friends with the host family today. My daughter Gaby learnt the profession of a forwarding agent and my son Frank trained to be a car mechanic. However, today both children are now working in other professions that are less strenuous. Since the children will not take over the company, after 40 years I sold my big truck to a young man who also wants to start a company.
Retirement doesn't really exist. I mainly take care of work on the house and in the garden. I regularly visit my youngest sister and other relatives who still live in the old home village.”

Conclusion and Wishes:
Finally, I asked about the motto of life and what else he wishes for the near future:
"Through work and diligence, one can accomplish almost anything.

My great happiness: my wife Mia, my two children and the 4 grandchildren as well as good friends and relatives who are there for each other and help each other. Friendship is a matter of honor. You don't abandon the people who have helped you. I hope that my heart and the shortness of breath will get better soon because of the operation, so that I will be able to work more efficiently again and do the upcoming renovation work on the house. And that the family sticks together and stays healthy for a long time.

I would do everything the same way again. Of course, I have made mistakes, but that is part of life. I am satisfied with my life and what I have accomplished.”