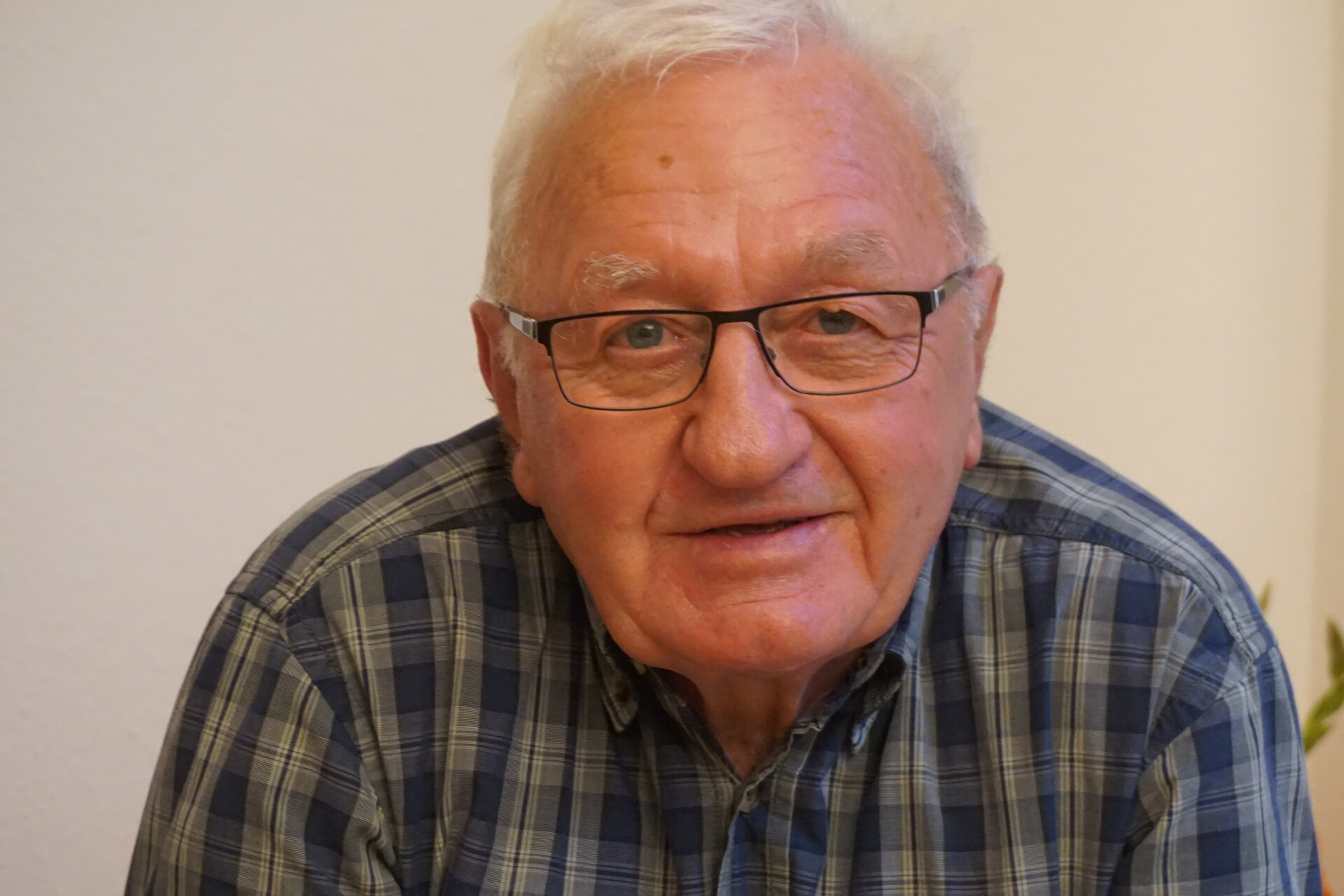 Manfred was born in 1948 in a medium-sized town in Germany. At the time of the interview, he is 72 years old. He lives with his wife in their own house in a small village in Rhineland-Palatinate/Germany.
He has three adult children from his first two relationships. His current wife has an adult son from her first marriage and two grandchildren.

Childhood and adolescence
Manfred's parents met in Berlin during the Second World War. During the war, his four-year older brother was born in June 1944. His father was still a prisoner of war. After the end of the war, his parents settled in the city of Wiesbaden, where Manfred was born.
For the first six years, the family lived in a so-called "socially deprived neighbourhood". Manfred felt comfortable there, there were many children in the neighbourhood with whom he could play together, he describes it as a wonderful time. His father rose professionally in the city administration during this time, which was one reason for moving away to another district.
"For my father it was no longer the right home, he wanted to leave there. For me, moving away was a loss".

About his childhood, Manfred says: "My childhood had been - I think - a happy one until I was 12. I think I was loved by my parents, I'm only able to say that today, I didn't perceive it that way for a long time."

His older brother experienced politicisation through the start of the Frankfurt Auschwitz Trials. "Through these trials, the topic of the Holocaust finally arrived in German society after many years". His brother and he had heated discussions about it with their parents, "there were terrible arguments". Again, and again, they asked their parents questions like: "Why didn't you fight against the regime? In what way were you guilty?"

Towards the sons, the parents only showed defensiveness in these discussions, the typical explanations at that time: "we were victims too, you have no idea, it was impossible to resist". Manfred perceived a latent anti-Semitism in his parents.

"What concerned me most in these arguments at the time was that not one sentence, not one feeling or sentiment about the murders of six million Jews crossed from the lips of their parents".
Shortly before his father's death, when Manfred was sitting at his father's bedside in hospital, he suddenly said how much it had bothered him during the war to sit on a plane and drop bombs on innocent women, children and men.
"It made me very happy that he was able to tell that again".

Adult – Time
His brother's political stance and his parents' reactions led to an estrangement in the family. His brother moved out of the family home when he was 18 or 19 and married early.
After his brother moved out, a difficult time began for Manfred.
"My brother moving out was a great loss for me. I already had an inkling of what was coming, that I would have to leave the family".

For about three to four years, he did not know where he was going. He started an apprenticeship as a forwarding agent, but after completing the apprenticeship he realised the strong impulse to "just get out of the family". He had desire to travel and

first went to sea for almost a year, then he did a few more jobs in the field of his apprenticeship, but it became increasingly clear to him that he was not “on fire” for this profession.

Manfred's politicisation really began after the "Prague Spring" and after May 68 in Paris (the beginning of the student movement). He communicated a lot with his brother about politics. "We wrote each other very long letters and exchanged ideas about politics". His brother was an important reference person for him, tragically he died at the age of 28. "I loved my brother very much".

Manfred distanced himself more and more from his parents, who could do nothing with his sympathies for the "left-wing movement". For his parents, "going to work, having a career, dressing properly and having your hair cut correctly" were important issues. The father expelled him from the parental home twice over the years - once six years and once one and a half years when they had no contact at all.

"The parents got away from me, for me there was now the issue of being alone, maybe a depression slowly started. I was looking into the dark and did not know what to do with myself. There came the fear of the black hole that could swallow me up".

The idea arose in Manfred to be able to combine work, politics and making money with a profession in the social sector. Starting to study social work at the University of Applied Sciences was the beginning of a beautiful and exciting life for him. "I was like in a new world, it was a human paradise for me. We had a lot of freedom in our studies, I moved into my first shared flat during that time, we wanted to change the world."

During this time, Manfred learned to develop ideas, to tackle things, to implement something and to complete a project. After finishing his education, he did his state recognised internship as a social worker. He had a child with his first intensive relationship, and they lived together with the child in a new shared flat. The beginning of the relationship was not easy, which changed positively after the birth of the daughter. "Finally, after all the difficult years in my life, I was there where I had intense feelings towards my partner and our child. My daughter was a big anchor in my life". Life in the family was divided in such a way that Manfred was predominantly the "househusband" and his partner worked as a social worker in a homeless settlement.

Manfred's first project was to start a toddler group, his second project was to start a left-wing bookshop, which he ran successfully with a co-op. After six years of within this relationship, his partner confronted him with the fact that she had a lover and that she expected him to tolerate it. "It was the zeitgeist among us leftists to tolerate it and not stress about it. But it was the beginning of the end".
After his partner ended the relationship with him, Manfred was very distressed. “At times I felt like an aeroplane at 10,000 metres running out of fuel."

In this situation he tried to take his own life, still in hospital it became clear to him that this was a turning point where he had to start again. He set himself three goals, work in his profession as a social worker, have another child and build a house.

The clear goals helped him; he first started the project of training workshops for young people. These were opened after 11 months of planning and all the participating young people have successfully completed their training here. "It was a wonderful time, we were all very proud."

Manfred found a new partner who brought a small child into the marriage, after a short time their son was born together. With this partner he also bought an old house, which they developed together.

He had achieved his three goals, but the marriage was not stable, and after difficult years they decided to divorce. After some time of being alone, he met a woman in Berlin, there was a long-distance relationship for 2 1⁄2 years with long and intense phone calls and meetings on weekends. Due to the growing desire to end the physical distance between them, his partner moved in with him in his village and they got married. Here they have lived together for 12 years, Manfred says, "in this relationship I am finally at home and happy" .

Age
With the onset of retirement, Manfred had no interest in retiring. He wanted to continue working and cared for young people, some of them unaccompanied refugees, in the context of educational assistance. For five years he worked half-time and only then slowly reduced his workload. Now he looks after 4 people, 2 of whom are elderly.

Furthermore, he read to a kindergarten for several years and initiated the 'citizens bus project' in his village. The bus now runs regularly. "Commitment is part of my life".

His wife would like to move back to Berlin after she finishes her professional life, so they are planning to move to the big city, where a new life will begin. However, Manfred cannot imagine "doing nothing", it could be that he will look for a smaller care job there or look for projects in which he can actively participate.

In the last few years, he has started to write biographically, he has now compiled over 50 texts that he would like to have printed for his children. He has also reactivated his interest in sculpture. The process of working for 3 - 4 months on the development of a sculpture pleases him and satisfies him a lot.

For the next phase of growing older, he does not want any material things, nor is he interested in major travel. It is important for him that he can remain active, participate in projects or political initiatives, and continue to pursue his interests such as writing or sculpture.
His most important wish is that the good relationships with his children remain intact. He formulates wishes for each of his children: his first daughter has cancer; he wishes very much that she will get well again. For his adopted daughter, he wishes that she finds a good start in professional life and that her wish for a child comes true.
His son is still searching and is quickly overloaded with demands. For him, Manfred wishes that he becomes more stable and gains more self-confidence.
"I want my children to be able to lead a content life".

Manfred thinks that the move to Berlin will bring great challenges. He looks positively into the future: "I have the wish to become relatively old, I would like to reach the age of 90.“