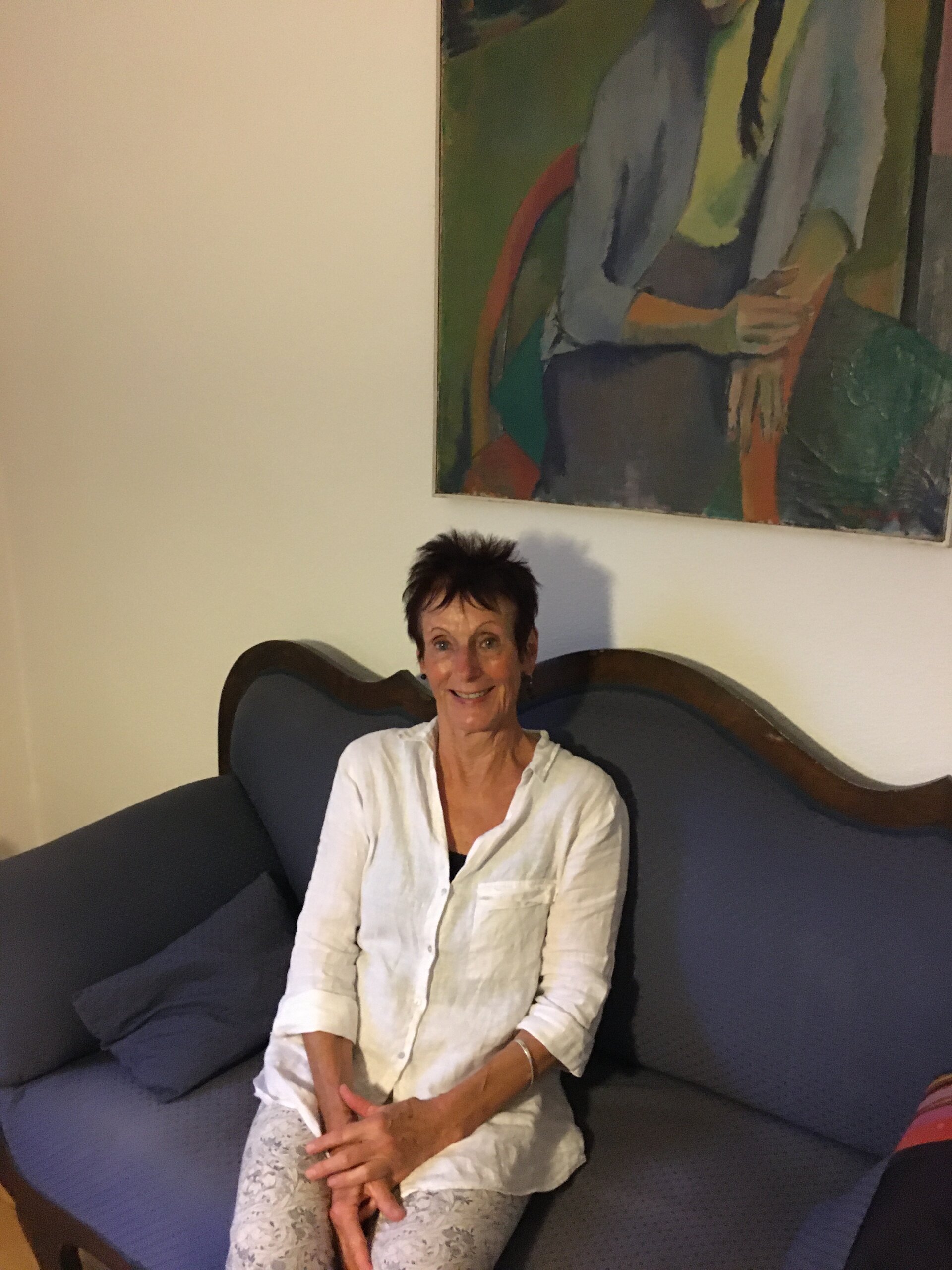 Gertrud was born in 1942 in D., West Germany, in the midst of the turmoil of
the Second World War. The mother is a nurse, the father a doctor. Since the
mother does not like it in Darmstadt and the father is offered a position as
chief physician at a clinic in Thuringia, the family moves to East Germany soon
after the birth. A little later the father is drafted into military service, where he
is killed in the war in January 1945. He does not live to see the birth of his
second daughter, Gertrud's sister, and does not even know that his second
child is on the way.

The family is left to fend for itself, since it has no relatives in the area, and it
suffers from the difficult war conditions and from hunger.
Gertrud reports on her situation after the end of the war:
"...then the Russians came and then we had to leave the first apartment, then
the second apartment, ... and since we had no relatives there, no one helped us
with food and stuff ... so I was always starving, thin as a rabbit, and at some
point my mother said, that's enough! Then in 1949 we fled across the border in
black..."

The family fought its way through to S. in West Germany, where Gertrud's
mother has a cousin who lives in a monastery there. They hope for help and
acceptance from her. But when they ring the doorbell at the monastery gate,
they are turned away. Gertrude says about this:
"We rang the bell and of course we looked dirty and they wouldn't let us in,
these good Catholics! Since then, religion has been a thing for me that is only a
figurehead.

The mother returned with the children to her parents' house in D., in the house
where Gertrud lives again today. They live there together with the
grandparents, an uncle, a married couple and a student.

In D., Gertrud goes to school, takes her high school diploma, starts studying and
meets her first husband. She becomes pregnant, as she says "unfortunately
very early" and goes with him to the South of France, where the two get
married. Her husband is twice her age and a sculptor. She describes the house
they live in as a "cairn". "...In the house there were no doors downstairs, there
were the stables and upstairs there was a room and when the wind blew, my
skirt moved. There was no running water, a small well ... I fetched drinking
water from the neighbor, who was about 200 m away. It was about 1964/65."

When her son comes to school, she says to herself: "I can give German lessons
...". But her husband is against his wife working. Gertrud says: "I sat there all
day long and started to rebuild. I then tore down all the walls, I built walls and
discovered my hands, which I couldn't do before, so I became relatively skilled
... all these things have their advantages and disadvantages.

Shortly afterwards she separated from her husband and returned to Germany
with her son. She finds her own apartment. A new man enters her life. She
marries a second time. She says: "It was actually quite a good relationship in
the beginning, he was a bit macho, but I was used to it. I got myself a job very
quickly." She will work in this job at the publishing house for 35 years.
Until the birth of her second child, she will work half a day in the office and half
a day from home.
She raised her second child almost alone and worked almost exclusively from
home. The second marriage also failed.
The second husband did not contribute much to her livelihood. Although he
had wanted a child, he had hardly taken care of the upbringing and had
contributed little to the livelihood. At some point he also beat her; when the
marriage broke up, she filed for divorce. She says:
"All right, I came out of it stronger than before, because I survived it, but it was
violent! The children both still small..."
But then she says ... "the free life began! Then I worked, had half this job, still
made changes on the side ... because the publishing house salary, I couldn't
have done that"...

In 1995 her uncle, the brother of her father, with whom she had a good
contact, died. The uncle bequeathed her the former house of her grandparents.
There had been a lot to do in this house. The uncle couldn't throw anything
away and she and her friends spent half a year cleaning the house. She says:
"It was good that I had to empty it out, because a lot of ideas came up that the
wall had to be removed... so gradually everything grew, and I developed
incredible skills!

Today Gertrud lives alone in this little house and has a subtenant. She makes
ends meet financially, she says and adds "... That is simply a matter of attitude.
I don't get a high pension, but I have paid off everything, I don't know how I did
it, but I did it!
As a teenager there was no trace of "fighter" in her, she was rather shy. She
adds "...but with her own will...that was helpful!

She reports on her current daily routine:
"Well, I had the cat all the time, I hope I get it back! She meows in the morning,
is hungry, then I go downstairs with her, then she gets food, I make myself a
muesli and a latte, bring in the newspaper and go back to bed. turn on the
radio, do half an hour of gymnastics every morning ... then the day begins!
Before Corona, she went out a lot in the evenings, to the movies, the theater,
concerts, but that's all a bit difficult at the moment. She has friends with whom
she does a lot. She has also played theater. And she continues: "We went on a
lot of city trips and saw all kinds of things...It was great and interesting! ... And
now at the moment I have the feeling I'm getting old!

It's good in old age if you stay active, "the wrinkles are coming, you can't do
anything about it! Before her ligament rupture she had moved a lot, but now
she was always so dizzy.
Gertrud is currently active as a volunteer in the city church at cultural events
and in a circle of migrant women.
She is accompanied by the radio, and on television she is interested in the news
and cultural programs, but she doesn't like the detective stories at all.
She has a cell phone and computers are a matter of course for her. "I have to
search and find certain things on the computer and get a little information, but
I'm not such a computer freak.
She has good contact with her children and grandchildren, but they live far
away.

It is important for her in life to live honestly and not to fall for consumption.
About this she says: "I hate it when people have a full closet and then still buy
and buy and buy."
Poverty in old age is often a reality nowadays, but because she has the house
and does not have to pay rent, she is not affected by this. She says: "Besides, I
was so hungry as a child, I didn't have anything to eat in France, so I'm actually
used to it and I have the feeling I can live in luxury here now. It's not luxury, but
for me it's just right, I don't want to have golden cuisine".
She thinks that politics today is more concerned with old people. The situation
is particularly difficult when people can no longer live at home.
Her own life is very different from her mother's life. But she still feels close to
her grandmother. She got along well with her grandparents and has put her
current sofa where she used to sit with her grandparents in the house. What
she does not share with her grandmother is "that she (the grandmother) had
her husband so well under control. Whenever she wanted to get things done,
she always said: "Heinrich, Heinrich, would be nice if ...".

Finally Gertrud says:
"I had an interesting but difficult life, I have mastered it and I am a bit proud of
it. But nowadays I'd be happy if someone nice lived here with me, not as a
partner, it could also be a woman... because I'm always alone, when I want to
talk to someone, I either have to make a phone call or go out somewhere or
say to someone: Listen, do you want to go to the theater with me, do you want
to have a coffee with me or something like that and that's sometimes too much
for me, it's tiresome!
In principle, I'm still relatively satisfied with my life, it wasn't boring and I made
it"...