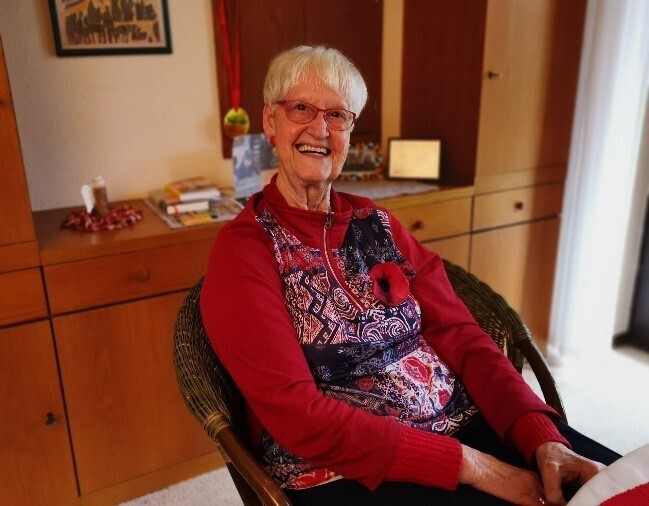 To do the possible in the impossible

We meet on Tuesday, the day of Mardi Gras, in her small apartment in Söflingen. ’I don't have anything to do with Mardi Gras anyway,’ says Doris L., who will be turning 82 the next day, on Ash Wednesday. This woman, who worked as a religious educationist, wants to mediate between the generations by bringing together residents of retirement homes and kindergarten children.

Frau L., how mobile are you?

I haven't been able to ride my bike for two years now, so the places I can go to are limited. I still travel short distances by car and take care of myself. If I should not be able to do this anymore, I have already chosen a retirement home for myself.

Are there recurring appointments in your daily life?

Yes, once a week I go to the Protestant Family Centre to see the children at the kindergarten and to eat with them. I am called the “food grandma” there. I sit at the table with the children and they talk or ask questions. For example, we have calculated how old we would be all together. And we came up with exactly 100 years. 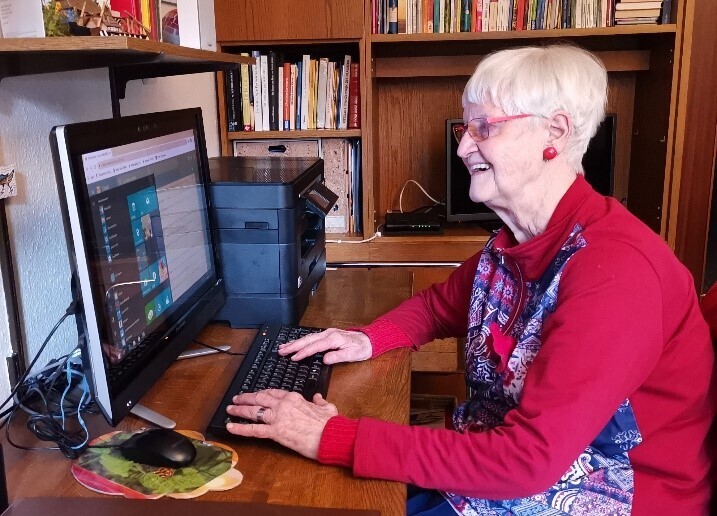 Why are you a "food grandma"?

Working across generations is very important to me. Even with confirmands from the church. Most of them have grandparents who are still working. But they have no idea about what life is like in a retirement home, for example. When a confirmand has to push a wheelchair around the corner, he’ll be surprised how hard it is. But I also hold church services in the retirement home. In this way, I am in contact with all generations and I learn from everyone. Recently, for example, a 103-year-old woman said to me: ‘You know, the thing about terrorism and violence is that you smash the doors instead of deliberately opening them with a handle.’ That's a remarkable sentence!

What did you learn from the children?

That they live in the present. That's important to me too. "Things were better in the past" is an inappropriate phrase. But, of course, I also understand what's going wrong today. For example, when children tell me that they're not looking forward to the weekend because everyone in the family will be looking at their smartphones again. I also notice for two years now that speech is declining among the children. Very often, they can't produce a complete phrase.

What would you pass on to younger people?

Not to demonize the media, but to practice the right way of dealing with them. I also think it's important to have one meal a day together - without a smartphone.

Do politics play a role in your life?

Not the so-called “big politics”. It's all only about power. For me, it’s important to get involved in the local area, like volunteering at retirement homes. When I was younger, it was said: ’The woman is silent in the community’, it was not usual to get involved politically as a woman. I see myself as a mediator for older people. With whom you have to talk loudly, without the digital media. Since they often have bad eyesight. You just have to consider this.

Do you have a life motto?

To do the possible in the impossible. Not to let yourself down. For example, I walk to the pulpit with sticks and then I hold on to it. I feel no pain during the sermon.

I was born with a clubfoot. As far as I know, when I was a baby, it was bent and put in a cast. During the war, I had my ankle stiffened surgically. I was four or five years old at this time. Walking is still difficult for me today, I need orthopaedic shoes and recently a rollator to help me.

Yes, I have a daughter, she's a pastor at a school. My husband was depressed. I knew this when we got married, but I thought it would be fine. We were married for ten years, then he lost his job in the times of recession and in 1979 he threw himself in front of a train. I had to identify him. These are pictures you’ll never forget.

Yes, I've had certain dreams for many years. In the first three years after his death, my husband came down to me from a mountain, brushed his hair out of his face and I saw that his wound had healed. In the next two or three years he came down from the mountain again and was dressed like a monk. He had a birch cross across his shoulder and he stood in front of me saying, ‘Remember this, you can't do anything without it.’ In the third dream, he came down from the mountain and was dressed beautifully, like I always liked him to be, in a suit and tie. He was very happy and told me, ‘Now I'm where I belong.’ That was 13 years after he died. That's when the dreams stopped. But since then I became certain of what resurrection means: That when we die, we reach God.

You had to raise your daughter alone?

I was a single parent at a time when this wasn't usual. My daughter was eight years old when my husband died. Luckily, I still had my parents where we could have lunch. There was no child benefit then, and the church didn't pay as much as the state. But I always got along with the money. I didn't travel around the world, but I often visited family leisure camps with my daughter.

You were and are  a religious educationist. How did you come to this?

I visited a girls' high school and a business school. I was often sick because of my foot. I had my first job as a secretary in a children's home in Waiblingen, then I worked in two tax offices in Ulm. But I was deadly unhappy with the numbers and the bookkeeping work. An alternative medicine practitioner told my mother: ‘If she doesn't get another job, she'll become depressive.’ With the help of our priest, I was able to visit the deaconry seminar in Denkendorf and additionally completed training as a predicant. At the age of 26, I started my first job in Crailsheim as a catechist, nowadays called religious educationist or teacher.

You worked in several schools?

I worked in various schools in and around Ulm. Before I retired at the age of 60, I taught at the Waldorf School for 18 years. There I was well respected because I publicly resisted statements like ‘Whoever takes his baptismal vows seriously does not send his child to the Waldorf School.’

Do you have a large circle of friends?

No, I have many acquaintances. My daughter married a widower with three children, with whom I have a rather loose contact. Meanwhile, I take part in a discussion group on the topic "philosophy and faith", where I meet interesting people.

This would mean that now you no longer take care of others, but do what is good for you?

Yes, that's right. I still have to get used to that (laughs). And to me getting help from others.

Three or four years ago, I bought a computer and my daughter helped me to set everything up. I realized that I'd be left behind otherwise. Even the priests didn't want to write me letters anymore, they wanted to send me e-mails. I can do that now. And I enjoy it.