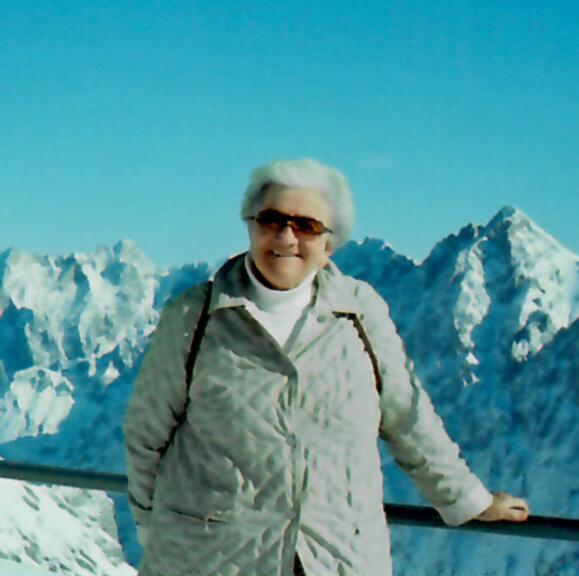 Ms. W., born in Meißen 1n 1932, is 87 years old. Her father had to go to war. She grew up in Saxony with her mother and brother until 1947. Because there was no food after the war, the family moved to an aunt in Württemberg. After years of captivity in the Soviet Union, her father joined the family in Swabia. At the urging of her father, Ms. W. trained as an office worker and then worked in a bank for five years. After a social year, she decided to train as an educator and then as a special education teacher.

Ms. W. receives me in her apartment on the 8th floor and asks me to sit down on her favorite seat. From there you have a wonderful view over Ulm. You can see the minster, houses, churches, and trees.

Can you describe your current situation?

I'm fine. I live with my five limitations: I see very badly, I hear poorly, I have chronic intestinal inflammation, only 50% cardiac output and a weak brain, which means that I can no longer absorb anything after a while and need rest. The problems came little by little. When I was 80 I had to give up the car. I have arranged myself and I am content.

My day is structured, I need the rhythm. I can meet my own needs such as hygiene and cooking without outside help. Every day I meet different people. This is very important to me. I get benefits for blind people from the Cty of Ulm, so I can pay for the services. I am very grateful for it.

A cleaning aid comes to tidy up on Monday. On Tuesday I see a nurse, who gives me the pills for the week. I am unable to fill out forms or write. I don't see that anymore.So a former colleague does the written work on Wednesday. On Thursday, a woman from the association of neighbours does the shopping and accompanies me to the city. On Fridays I have lunch with former colleagues. I used to cook. Now we're going to eat. This is how I get to know foreign dishes. Last time we were in an Indian restaurant.

I like that. On Saturday a woman from the neighborhood aid brings

books. I've been a bookworm since I was nine. She reads biographies

from the city library to me. I really enjoy that and look forward to it.

Audiobooks are of no use to me, it is too fast, I can't understand the contents.

On Sunday a neighbour visits me.

What contacts do you have?

I have a close contact with my brother's family, because I don't have a family of my own. A nephew takes care of me and is in charge of my affairs. I have friends from all phases of my life, with whom I talk on the phone and whom I meet. We have a regular retirees' meeting of former colleagues, which is a highlight for me. I live next to a large centre for senior citizens, so I can go to the doctors and the little shop myself. If I don't want to cook, I can eat there.

What are your hobbies ?

I like cooking. When I see a new recipe in the newspaper, I get the ingredients and cook the meal. I have an extra reader, which I can only use briefly, then my eyes water. I like to be around people and like to talk. In larger social events my head is pounding,so this is no longer possible. In the afternoon I need a rest and in the evening after the news I am in bed. I used to travel a lot. Now I can only watch TV programs about foreign countries.

Where did you grow up ?

I grew up in a village near Dresden. My mother raised me freely. I could be outside a lot and sang in a choir. At the beginning of the war my father was drafted into the armed forces.The farewell was hard. I only saw him once in nine years at my brother's baptism in 1940.

What were decisive experiences?

At the end of the war the bombs came, everyone in the basement was scared and cried. I was convinced that I would survive. But then hunger came with the refugees from the eastern regions. There was not enough food. So my mother and my brother had jaundice. I wrote to my aunt in Swabia whether we could come. With the approval of the American High Commissioner in Ulm we moved to Swabia with a few belongings.

How was life in the new environment?

I was went to a grammar school and wanted to be a teacher. After nine years a bald, emaciated, ragged man suddenly arrived in our apartment. He was my father who had come back from captivity in the Soviet Union.That was in 1947. We had not heard from him for a very long time. He decided that I had to go to a business school before I was able to finish grammar school. He wanted to establish a position first. I didn't dare to contradict him, although his decision was very hard for me.After finishing business school I worked in a bank. There I had lunch with a colleague. His friend told me that he was Catholic and that a close friendship was impossible. It hit me very hard.

What decision did you take?

I quit and did a diaconal year. I liked working with children and I trained as an educator. I was now of legal age and did not need to ask anyone. In a home for hard-to-educate girls a new manager one day took away some of my responsibilities. That deeply offended me. My confidence was shaken. I quit and studied curative education at Zurich University. That was a wonderful time and I still meet with my former classmates.

My work in Ulm

In Zurich I applied for a job in a children's and youth home in Ulm. There I was able to realize my educational ideas. I spoke with parents, grandparents, and social workers. I installed regular conversations with the educators about the children. There were also discussions about the reactions of the educators.

The children lived in family groups. I gave individual care to children with delays in their development. I did further training and put all my strength into this work. My parents and my brother and his family lived nearby. There I felt safe. I worked in Ulm until retirement and after that I spent ten years visiting people in a residence of senior citizens.

What do you want to pass on to younger people?

Listen to your inner voice. Feel what your options are and what is good for you. I myself am a great-great aunt and I write down my life in poem form for my niece. I am currently writing a poem about the organs, the gut and bladder and the other organs and that they should be in balance.

I am learning to live in friendship with my demons and to make peace with my different phases of life. This is very important to me. I believe that God has always led me. On his 70th birthday my father asked me for forgiveness. I could accept his request.

How do you see the finitude of life?

I am thinking of Hermann Hesse, of the poem "The Steps", that even if the sun sets, it still shines somewhere else. We also go to new rooms in the hour of death.

"The call of life to us will never end, heart bid farewell and stay alive."