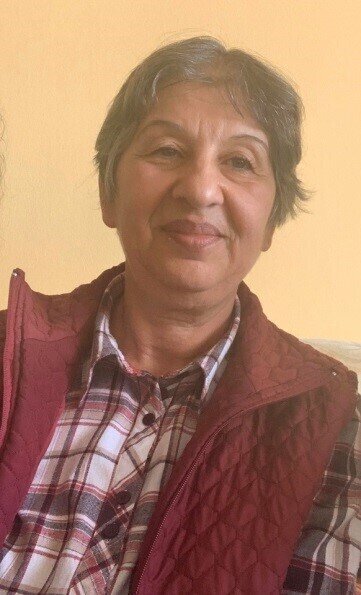 by Damla A. and Yoana K

Place of birth: town of Ruse

Place of residence: town of Ruse

Please describe briefly the life circumstances of your childhood.

My childhood went well in a working class family with two children. I have a sister. I went to school regularly.

Were you fully satisfied with the financial situation of your family and with the way your parents treated you?

Oh, I had a very good attitude towards my parents and they treated me well, too. I was sent on excursions, to summer camps.

Did you live only with your parents or with your aunt, uncle?

And how was it with them?

Please describe the life circumstances in the period from your adolescence to your retirement. Was everything satisfactory, difficult, dynamic? And how did things go from your teenage years until your retirement?

I first finished a vocational catering school. Then I graduated University as a teacher in Pre-school and Primary School Education. After that I got married. I have two children and I can say that my life went well.

How old were you when you met your husband and where did you meet him?

What was the role of society during that time when you married, graduated and had your first child? What were the circumstances then?

And how would you describe all this, for example, was it satisfactory for you or was it rather difficult?

It was not difficult. But life was just as it was, and we took it for granted. We have not wondered why it was one way or the other.

Please describe the relationships between the generations in your family. And what do you think was the attitude of the elderly when you were younger? What were the values ​​and attitudes of young people towards the senior citizens at that time?

We were told by the elderly “You claim you know a lot; you always want to have things done your way. ”

And how did you make important decisions, for example, decisions about your education or your profession? Did you listen to their opinion?

We certainly did. But not particularly. I went to enroll in school and in the teacher training college all by myself. But they (our parents) wanted to be involved in the decision-making process.

Do you have any observations from relatives or acquaintances that clearly mark the boundary at which adults dictate their attitude to the younger ones with regard to work, the choice of profession?

There were such cases with regard to work and marital status, even when people were getting married.

Have you experienced any such cases?

Can you briefly describe any such story?

A friend of mine refused to get married because they didn't want her as their daughter-in-law because she was less well-off.

The relationships between us were sometimes good, sometimes not so good.

There was always a boundary between one generation and another. It has always been like this. But there was an understanding - yes.

So you had a good example. Did they help you when you already had children?

Yes, they helped us.

Did you live with your parents or your husband's parents?

At first we lived with my husband's parents and then we lived on our own.

Were they able to help you in any way?

Please compare what you thought about aging when you were young, your expectations for your retirement life, and how things really are now. What does retirement mean to you?

I can say we just didn't think about it. Apparently now, as we get older, we start to think about old age.

Didn't you have any expectations?

How would you define your life so far, after retirement - more like a time of rest and enjoying quiet moments, or rather, a time of isolation, of loneliness?

For me the situation was like this: my husband was ill and I looked after him for 4 years. It was difficult. He passed away. It's a little lonely now, but not quite. It’s more or less fine.

My son is with me and my daughter visits me, too. We have a very good relationship. I live with my son.

Do you like that? Does he help you? Does he care for you?

And financially, how are you doing? Is your pension sufficient?

It’s not enough for now. However, I don’t have many financial obstacles. And I feel secure because we own our home. My parents were local residents and managed to buy a place of their own. I do not know what it is like to rent an apartment.

I get up early in the morning. I wash, have breakfast, cook, clean and then rest.

I watch TV. I come here (The Centre for Social Integration and Rehabilitation) and I am very pleased to be among other people. I used to do gardening. We had an allotment garden where we went with my mom, and it was nice, because gardening helped us to detach ourselves from the problems of everyday life and to unwind.

Do you have grandchildren?

No, neither my son is married nor my daughter.

What media do you use in your daily life? What new technologies do you use and do you have any impression whether and how your generation uses them?

I only use a tablet and watch TV.

What motivates or can motivate you?

I wish to be healthy, because I have some heart problems. I hope to be healthy enough so that I can help my children and I hope for them to be healthy so that they can help me. They lost their father. If they lose me too ...

In your opinion, what is the primary role of pensioners?

Passing down life experience and respect for traditions.

What would be your message to the younger generations?

Let them respect the elderly more. We have always been taught to show respect to our elders.