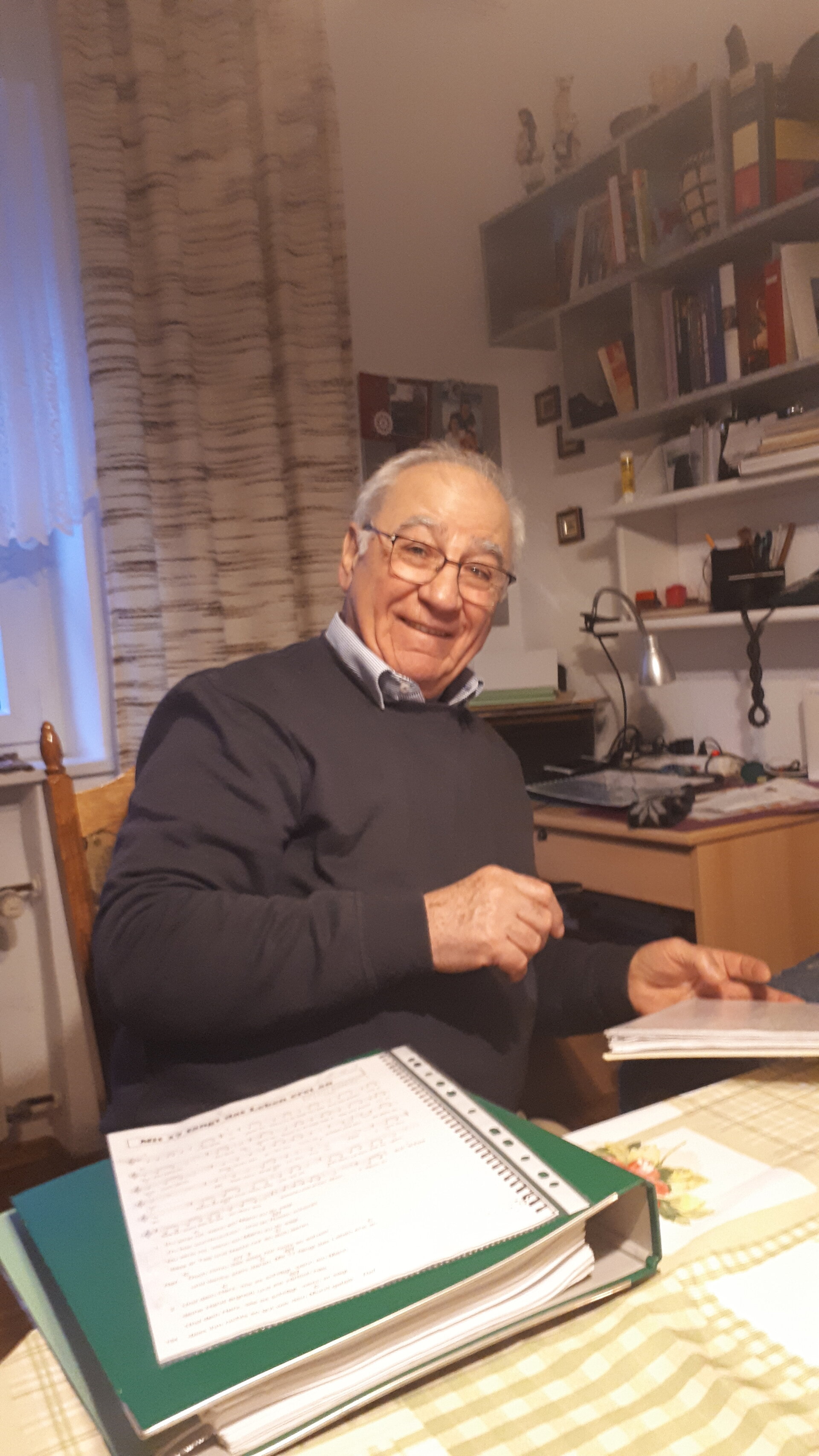 with Paolo V. in his apartment in Neu-Ulm

Paolo V. was born in Sassari, Sardinia, Italy, in 1939. At the age of 21 he went to Germany as a “guest worker”. He ended up in Ulm feeling at home there without ever losing his ties to his home Sardinia. He married a German woman at the age of 23, with whom he had been happily married for 56 years. She suddenly died two years ago of an incurable illness. With her he has two daughters who live with their families in Ulm. In addition to a hard working life and great involvement in his trade union, for decades he has animated many dance evenings in his spare time with various music groups. After retiring at 60, he continued organizing these events. He also is very passionate about gardening. Now life is calmer, but for him staying in contact with people is very important, whether in Ulm / Neu-Ulm or in Sardinia.

Paolo, in your apartment we see many traces of Sardinia, photos, objects, how closely are you connected to Sardinia?

I was born in Sardinia and lived there until I was 21. I attended elementary school until I was 14, more was not possible in the small town, Sindia, where I grew up. Then I started my job without any training, which was also common with us at the time. I worked as a bricklayer, later as a carpenter and locksmith, and have paid there for 5 years my first social contributions.  These years have shaped me a lot, also concerning my political attitude. My father had a large piece of land which was used mostly for wine, I am still using it today. To date, I have many relatives and friends in Sindia. I am always there from mid-April over the summer months. In late autumn and winter I am in Germany.

How did you get to Germany in the first place?

A relative of mine worked in the administration in Sindia, one day he told me that the Germans were looking for “guest workers” from Italy, the offer sounded financially interesting, so I got in touch with two friends and we reported for duty. After two weeks we got a positve answer, and then it started pretty quickly. In Verona we where medically examined for days, then we traveled to Ulm by, where I had been assigned to a job at plough company Eberhardt. We were picked up at the train station by tractor and started working the next day. Even though it was May we were freezing, we did not expect that. It was pretty hard physical work, we worked in chords, but we earned 300 to 350 DM, which was a lot of money for us. The company accommodated us in a large room with bunk beds. We were 13 Italians and one German. The room we were in was on the 5th floor. From there we looked directly at the football stadium that was our first contact with our new home. However, after 4 months I was able to move to a fellow Italian in Wiblingen,we were able to share rent, which was a lot better. I couldn't speak a word of German, but I tried to learn German from the start. Since I like to dance, I went out on weekends, which also made it much easier for me to settle in. I met a lot of nice people there.

Then didn't you want to go back to Sardinia?

No, I had settled in pretty good. I had a good job in another company, got to know my future wife, and then found a job as a truck driver in a food company, where I worked until 1999. Everything went smoothly. I am a political person. I have been heavily involved in trade unions and have taken on various important positions in them. I made a lot of music in my free time. I also finally got my Terza Media, the secondary school certificate, which I couldn’t do in Sardina, through the catholic mission in Neu-Ulm, with German as a foreign language. That was an offer by the Italian Consulate

My wife also loved Sardinia, so we always went to my old home with my girls during the summer holidays and I was able to maintain important contacts.

What did you do in your free time?

"I brought my love for folklore music until I was 72. Unfortunately I can no longer play the guitar with my trembling hands and I can no longer sing. But I still play the e-piano today, in the apartment with headphones, so I won’t bother anyone.

My second passion are my gardens, here as well as in Sardinia. In Neu-Ulm I had various allotments. Now I am helping someone with his garden because he doesn't have that much time. Through my family I have a large plot of land in Sardinia, where I mainly grow wine, but also other things.

What did you do when you retired?

I retired at the age of 60 after 45 years of work, where I had paid into the pension system. My wife and I decided to live in both countries. We bought a small condominium in Neu-Ulm and renovated my parents' house in Sindia. That worked just fine. Unfortunately, my wife died of a malignant disease two years ago, and now I have to deal with everyday life on my own, in summer in Sardinia, in winter here.

How do you imagine your future?

Keep going like this for as long as possible. I listen to a lot of music, I also make a little music myself. I have two friends, one from Iraq, one from Algeria, I like to cook with them and their wives, in Sindia I have my the garden.

Later, when I can’t do all that anymore, I will go to an old people's home. My one daughter offered to move in with them, they have space, but I don't want to be dependent on any of my family, my freedom is important to me.

Many of your fellow countrymen return to their homeland in old age is that also in your mind?

I like to be there as long as I am feeling fine, but when I am frail I don’t want to be “parked” there. Then I would rather be in Germany, everything is more anonymous, nobody knows me as I used to be. In Sindia I want to stay in the minds of the people as "fitter" Paolo.

How do you use the new media?

I have a smartphone, a laptop, I use Whatsapp, I read a lot on the Internet, I write everything on the computer, if only because the trembling hands are no longer suitable for writing. I learned this early on, with friends, through instructions and by learning by doing.

I talked to my wife about it, we didn't care. But now that she is buried in Ulm, I would like to be buried here too.

Looking back, what did you enjoy?

There was not as much freedom in my youth in Sardinia as the youth has today, but the sense of community was much stronger. There was of course not that much distraction, but in the family the bond was strong.

Could you imagine marrying a German?

Yes, but also a woman with a completely different national background. I am an internationalist by nature and by conviction

Motto that you want to give to the grandchildren?

Grow up with two cultures, develop and maintain openness for others, look at history and learn from it that. Not everything was the way it is now, that peace in Europe cannot be taken for granted

I'm against any kind of fanaticism.

If you met God, what would you say?

Paolo Spontaneously: “Dear God. Make me pious that I can go to heaven.” Laughs and says: This is the prayer I learned when I was child. no, rather: God is hiding. You have to do things yourself!”