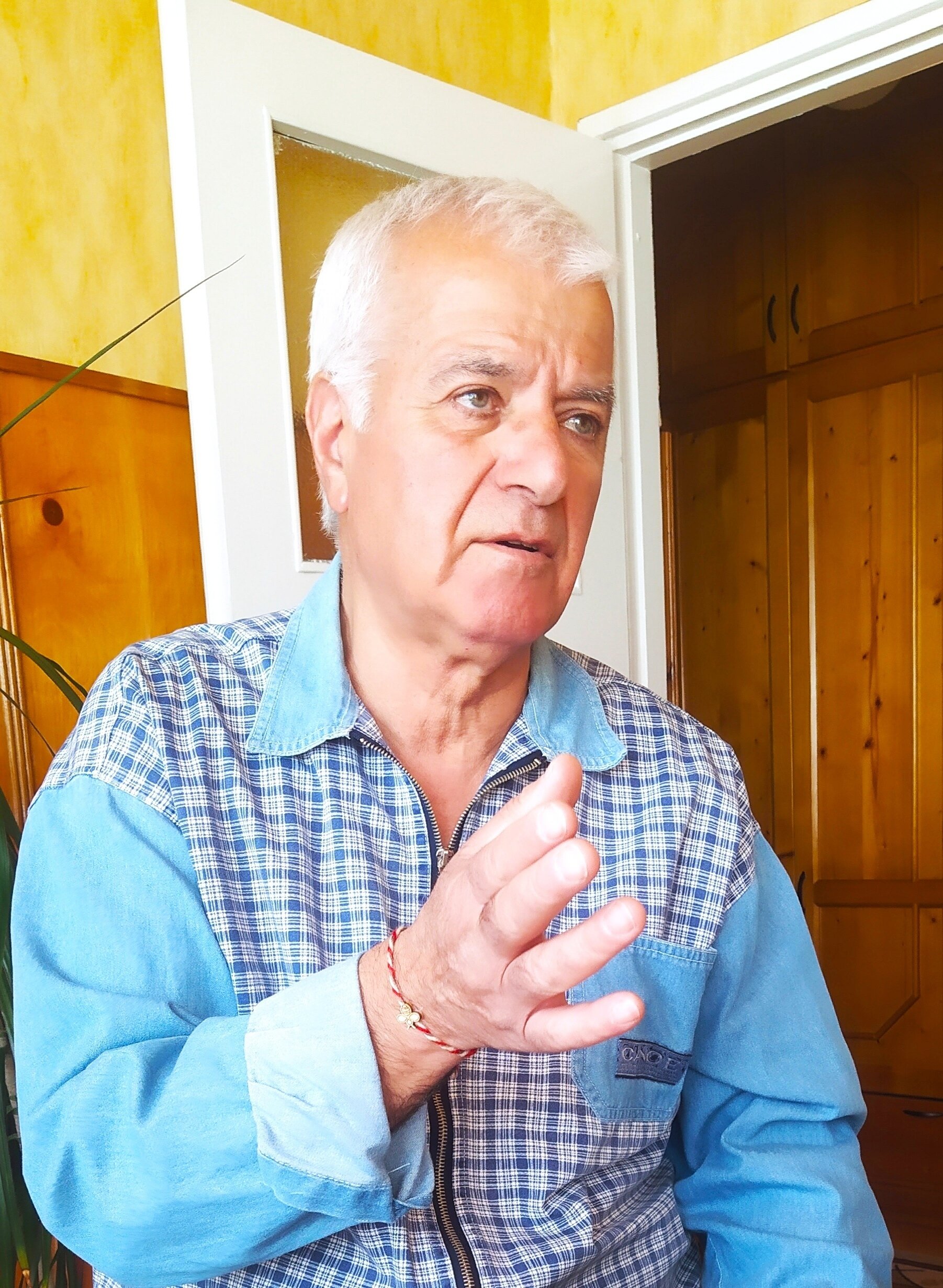 Place of birth: Yakorudavillage, near the town of Razlog, Bulgaria

Tashko was born in 1951. Childhood and teenage years Tashko was born and grew up in a typical family for the fifties of the 20ieth century. The family had two children –two boys. They lived together with his grandparents in a joint household. Today, here members very well the life during his childhood. Their family was very poor. For him it was a tough period for living (1956-1960),he remembers very well the time of the coupon system. There was a portion of bread per person per day. One could purchase their portion only by special coupons. Also, some other foods were soldand distributed through the coupon system. For him it was hungry years’ period when they were living in poverty.The family had no other property except the house. The memories of poverty and hunger had left a heavy imprint on him and his main goal became to work and so to be able to provide and sustain his family. He decided that his children would never be hungry, and that he would provide them with everything necessary for a normal life. His father was disabled and could not work. He became disabled as a result of an accident at work and received a small pension. His mother was not working because she had to take care about herhusband. She worked very hard but without any payment. His grandparents were working and thanks to them the family managed somehow to survive. So, he got used to work since childhood in the household and as teenager he and his brother worked to help the family survival.

Within the family they had close and friendly relations with high respect to the elderly. The two brothers had close relations during their teenage years and later up to their marriage, but after they married they were not so close though they have kept good relations. While their children were small, the families maintained closer relations, but when they grew up –little by little the relations weakened. That proves the Bulgarian proverb “Where the woman is from -that's where the family comes from.” His brother had already passed away. According to Tasho, in the past the young people had high respect and homage for the elderly -in his family it was unthinkable not to fulfill a wish of an elderly. The word of the adult was a law, it wasnot discussed as it was obligatory to obey, to do and to fulfill everything.That used to be the upbringing in most of the families in the village where he grew up.

He is disappointed about today’s young people behavior and their understanding about the lifestyle, their demotivation and lack of responsibilities to their job. He could not accept the wishes of the people to obtain many goods without bothering to achieve them, the careless expenditures without a thought for tomorrow. At the same time, he does not understand the behavior of some parents who are willing to be deprived in the name of their children, as well as to support them and take care of their children since they are old enough to work and take care of themselves. He is skeptical about those parents who support the families of their grown up children and who satisfy their various wishes, since “the children” are healthy and there is no sound reason to “lie on the backs of their mother and father.” He does not accept the so-called “development of today's values”, which should affirm the better and the pursuit of a better life, he calls them "replacement values and to try to outsmart the personnext to you." And then right away he summaries his thoughts in another proverb “Godwill put everyone in their place and justice will come, the tricksters will line up next to each other.” Speaking about his childhood and teenage years he does not want to remember those years because of thepoverty and the frequent hunger that left indelible mark in his emotional memory. He also remembers the social differences among his classmates and his tough live to be a child of a disabled father. Meanwhile, his memories about the way of life, the morals and the relationships within the extended family are an example and a valued goal of human virtues–honest and sincere relationships filled with respect for the elderly and the great love he received from his parents. He appreciates greatly and speaks with pride about the efforts his parents made to bring him and his brother up and to raise them to become honest and hard working human beings.

Despite the difficulties, Tasho finished the localschool –secondary level and immediately started work. He had several professions: cooker, construction worker, but most of his working life he was a miner. The motive to go to work in the mines was to ensurea better income for his family, thus providing them with better living standard. As a worker in the mines since being 27-28 old, he got the diseases characteristic of this profession, which stayed with him in the years to come.

Today in his seventies, widowed, he lives together with his son, who is stil la bachelor in the town of Razlog –a middle sizedtown in the foothill area between Rila and Pirin mountains. He became pensioner ina very early age –at 45 as he used to work 16 years in the mines. In Bulgaria working in the mines is considered a first class category type of job. This means that a yearworking as a miner equalsto 3 years working in the other general professions(the most common category III). Each year during the time he was a miner, he used to spend about one month in a rehabilitation center under the Medicare program. Also, he worked as a restaurant manager for about 5 years. His working time totals about 55 years, based on that he received a pension. After his retirement he did not have regular paid job, however that does not mean that he was not economically active. The first 6-8 years after his retirement most of the time he was in hospitals and rehabilitation centers mainly under the Medicare program as a heavy mine worker. His health didnot allow him to have a regular job after retirement. He supported his wife to start up a hairdresser business, where they offer hairdressing and cosmetic procedures. On a daily basis he manages the business of his wife, takes care of the children and maintains the household. Meanwhile, he is taking care of his health as much as he can. Gradually, however, the possibilities for his rehabilitation shrink due to a range of reasons -most of the necessary manipulations became paid and it was impossible for him as a pensioner to afford them.The family faced a lot of challenges when his wife became ill and practically all family income was directed towards coveringthe cost of her medical needs and care. The funds covered by the National Health Insurance Fund were too insufficient to provide for her medical condition and the family paid it by themselves, additionally. All family members were united in obtaining the needed funds for the medical treatments. His daughter was married with a child at that time and was living in another city, nevertheless she was actively involved and supported the family for her mother’s treatment in any way possible. Despite all the efforts, his wife passed away and along with his grief, the only consolation for Tasho is that they did their best in taking care of her until her last days, they fought for her life and did not give up. He completed his memories for the period with the words: "God is relentless..."

Today, living as a pensioner he could cover only the costs for basic food, expenses for the home and medicines. He could not afford any luxury whatsoever. Most of the time he spends at home, he does not want to go to his daughter and travel to Sofia –he does not like the big city. He enjoys cooking and likes to invent new dishes to surprise his relatives with. In the summer time he loves to work in his garden,where he grows vegetables and herbs, sharing them with his neighbors. It’s a pleasure for him to workin the garden, “to be busy with something meaningful, his hands to create something, to have life.” After his wife passed away he got into contact with a non-profit organization “Diabetes without Fear” working with children with diabetes and he transformed the former hairdresser space into a Consultation Center for children with diabetes. The Center operated for a year but after an accidental flooding in the space, it stopped functioning.

Nowadays, Tasho’s days are very similar to one another. He is politically active man, interested in the political and social life in Bulgaria but passively -he is not a member of political parties and organizations. He is well informed about political situationin the country and always has his own assessment about many of the current politicians and clearly knows whom he can and can’t trust. But he does not like to comment them within his close community. He is regularly buying the “GoldenAge”, a pensioners’newspaper. The newspaper provides him with diverse information on historical topics, documental stories and other articlesabout historically popular people. He likes to read about the history of the region. He is interested in body language descriptions and interpretations. He has his own understanding and evaluation about different historical periods, for the economical and social development of Bulgaria and this assessment he is conveying figuratively by analogies from natural, plant and animal phenomena. While his granddaughter was a small child and used to spent a lot of time with him, he was happy to take care about her. Thus, he supported his daughter “so that she could have some free time and take care of herself.” This is his way of mutual help. He is not interested in Internet and smart phones, does not accept and does not want to use in his daily life the modern communication technologies.

He is very interesting and pleasant person tocommunicate with. When he is talking, he uses a lot of proverbs and idioms, likes to summarize events with diverse nature –political, economical, social and likes to visualize the social life and the changes in Bulgaria, the demographic crisis, the increased mobility of people and the globalization processes, for him everything starts with the interaction between the human being and the nature. Asked briefly to evaluate the different periodsin his life, he described them as follows:

Childhood–living in poverty but it was a happy time, with a lot of love and care by his parents;

Teenage years–very interesting time, fulfilling his duties in the Army, in constant movement –“here and there and ... at the seaside. I can’t complain!”;

Active working period–toughtimes, hardworking time, got a lot of health “gifts” under a large specter of diseases;

Retirement -days are all the same, there is no desire for new endeavors, but he is always ready to help others -for their activities, though he helps only those whom he respects and trusts; he often thinks about death and how he will feel once he is up there. He is a man with a strong sense of humor and is always willing to joke with himself.