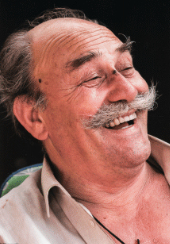 Janis was born in August 1945 in a small town in northwestern Greece. Today he lives with his wife in a rented apartment building in Frankfurt/Main. He has a son and a daughter who also live in Frankfurt. The daughter is married and has 2 children who are now 17 and 23 years old.I visited Jannis in his large allotment garden on the outskirts of the city, where he grows vegetables, as well as many fruit trees and flowers. We sat in the spring sun in front of his garden hut.

Jannis was born a few months after the end of World War 2 and just before the outbreak of the civil war in Greece. After the invasion of the Germans in Greece, a strong partisan movement against the occupation emerged, in which his father participated. Because of this, he lived with his grandparents along with his brother, who was 3 years younger, and his mother. One of his earliest memories is that an informer came to their home and asked him about his father. Shortly after, his grandfather was sent to jail because Jannis told him he had received letters from his father.

However the grandfather was soon released because good friends had interceded on his behalf, this was a very formative experience for 3-year-old Jannis. The leftists, to which his father belonged, lost the civil war and his father had to flee to Yugoslavia via northern Macedonia and from there he came to Tashkent. When he was able to return, Jannis was already 14 years old. During this time his mother was also exiled to a small island for 7 months. Because of his father, Jannis was treated as an outsider at school and bullied. He had to do various jobs for his teacher.After 8th grade, at 14, he left school. His father had opened a Greek Café after his return, where Jannis first worked. Later he became an electrician.In 1967, shortly after he was drafted into military service, the military dictatorship began after a military coup (1967-74). During this time, his father was once again exiled to an island for 7 months for political reasons. His father died in 1972.

In June 66, Jannis met his wife of 16 years, whom he married after his military service in 1969. His wife was from the same small town as himself and worked in a small hairdresser ́s shop. Soon thereafter, their 2 children were born.In 1972 his wife went to Germany as an immigrant worker. He himself did not get an exit permit for political reasons and stayed with his mother in Greece. It was not until the summer of 73 that Jannis was able to emigrate to Germany with a work permit. The children had come with his mother a few months later. They all lived together in a small apartment in downtown Frankfurt and in 1980 they moved to an apartment a few houses away, where he still lives with his wife today.

Jannis first worked in a furrier's shop, then in 1977 he and his wife went into business for themselves. They received furs from wholesalers, which they treated into jackets and coats. Frankfurt/Main was a center of the international fur trade at the time.The children were looked after by his mother, who also ran the household. Until 1988, they earned good money with the furs and were able to travel to Greece every summer for a long time. Then the fur market collapsed and they had to sell their stock and the machines far below market value.

Janis was only 44 years old at that time and then he worked here and there. He worked in a factory, worked in food retail and wholesale. He once had to take legal action against one of his employer in the social courts because his employer had cheated him on his social security contributions. When his employer went bankrupt in 1998, he "hung in 1 the air" again and was unemployed again. This was very hard for him, with his now 60 years it was hard to find a new job. So in his last years of employment he transferred cars to Greece. He picked up the cars everywhere in Germany and brought them to Greece via Ancona by ferry. This went well until the beginning of the financial crisis in Greece, in 2010. After that, the export of used cars to Greece collapsed.

His life as a pensioner

Since 2010 Jannishas been a pensioner. Although he has worked a lot and hard in his life, his pension is very very small. As a self-employed person, the payment into the pension insurance was voluntary and they had not paid anything. In his other jobs, Jannis had been properly registered with the social security. However, some of his employers had registered him with social security at a lower amount than he actually earned. This is one reason why Jannis' pension is so low today.

After they had to give up their self-employment, his wife was unemployed for only a short time. She found a job in a nursing home. There she works on 400 € basis even today, as a pensioner, still. She ́s getting a good pension and as she still works, they get along financially. His wife also makes small sewing work for the old people in the home, so she earns something in addition.

Jannis says that when they were young, their perspective and their vision of the future was focused on the present. They thought, now we work hard and make money and later we will go back to Greece. So they did not look ahaead, but spent the money on the children and their lives.

Their rent is still affordable by Frankfurt standards, since they have lived in their apartment for so long now. However, the landlord is trying to get them out so that he can renovate the apartment and charge double the rent. However, the couple resists this.

His mother went back to Greece at the end of 1985 and then, for as long as she could travel, always came to Germany from November until spring. This continued until 2015, when she was 94. Thereafter Janis went to Greece several times a year for 3-4 months to care for her and nurse her until she died in 2019 at the age of 98. He was able to be there when she died. This was a very special experience for him.

Janis has owned a large garden on the outskirts of town for 20 years. He spends every day there from morning to night, working in all kinds of weather, in both winter and summer. He has set up a small workshop in a garden shed. He has a friendly relationship with many of his garden neighbours. There are no fences between the gardens, it is a big friendly community, people help each other. His daily routine is mostly the same. His main effort is to get to his garden. At half past seven he gets up, makes himself a coffee and starts the day with a hot meal. After that, he goes to his garden. At lunch he eats fruit and a yogurt, and in the evening he usually eats feta cheese, tomatoes and olive oil. Friends often visit him in his garden. His daughter also has a large garden on the neighbouring property.

Although Jannis has lived in Germany so much longer in his life than in Greece, he misses Greece. His heart beats there, he longs for the life he lived while he was with his mother: going fishing with friends, the old acquaintances and the way of life. Jannis says that if he had more money, he would at least live in Greece in the summer and comeback in the winter, as many Greeks do.

Living in Germany has changed him, of course. He says every country has its advantages and disadvantages. In Germany, for example, he appreciates the punctuality. Greece, he says, has a very different way of life. But he dislikes the nouveau riche there, as well as the influential private TV stations that would spread a lot of lies. Jannis feels in Germany not as a foreigner but as a European. Jannis says of himself that he has two souls. One which gets upset when people insult him for example, the other Janis is "a thinker". He observes his environment and is thinking about the current topics.Jannis uses a smartphone and watches TV. He does not use a PC or email.When asked what he thought about old age when he was young, he tells a little anecdote. When he was 18, he worked as an electrician for a summer camp where young women cared for children. When his uncle, who was about 15 years older, asked him to put in a good word for him with one of the young women, Janis thought: what does this old man want....Jannis will be 76 this year, but it is hard for him to accept that he is already so old. He can still work a lot and well, feels physically and mentally fit. Nevertheless, he sometimes notices that his strength is not what it used to be. But he knows there's nothing he can do about it, that's life. The main thing is that he is healthy. His message to the boys is: live, live, live. Everybody should live the way it suits him and is right for him. The young people should be alive and not just conform. The old people should advise the young people on everything, if they want to hear it.

His motto is: "I am content. If I were young again, I would live again the same life I lived." But then he adds a small caveat. Financially, though, he would be more sensible and forward-thinking to avoid having to make do with such a small pension again.