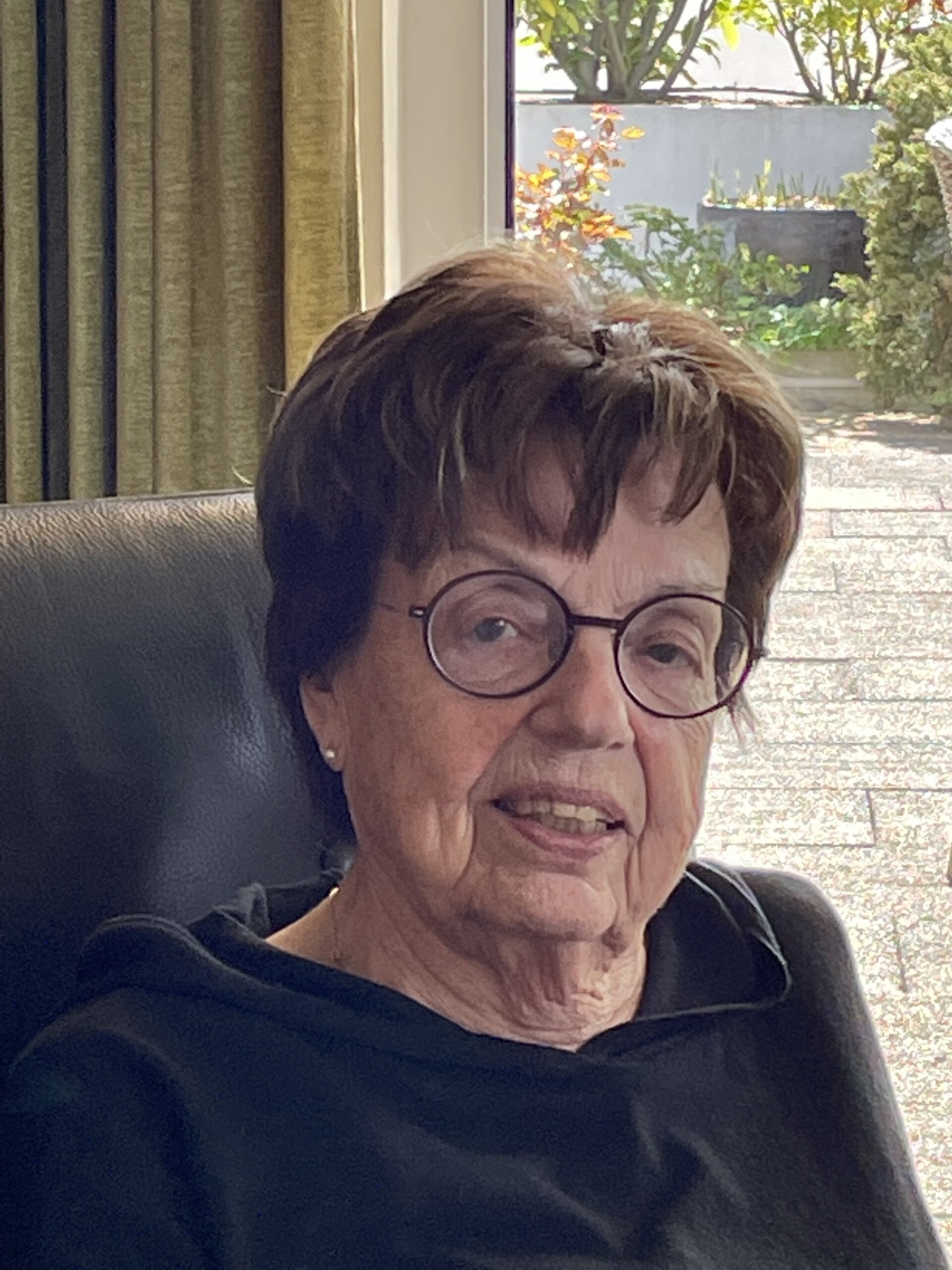 Ingrid was born in Berlin-Dahlem in 1937. She has dual citizenship (Germany and Switzerland) and has lived in Bensheim since 1968. She has one daughter, her husband passed away a few years ago.

Her own childhood
In spite of the war and the bombing raids, Ingrid found her childhood relatively sheltered: "My father was not in the war and was always at home in the evenings. Therefore, apart from the external conditions, it was a normal childhood. I had my family around me". She has a brother who is five years younger, her grandparents lived with them for part of the time, and there were also close ties to her parents' siblings: "There was always a bunch of family that stuck together closely".

After the major bombing raids and the birth of her brother, the family moved from Berlin to Bad Münstereifel in the Rhineland, to her mother's family. Here Ingrid's family lived in a house with her grandparents as well as an aunt and uncle and a cousin: "There were always at least eight of us at the table. Family was everything, so we didn't live so much on the outside. That offered us security. Money worries we didn't have, but it was difficult to have daily food on the table because there was nothing to get."

From teenager to pension
After the 'one year' Ingrid did an apprenticeship in textiles and then attended a technical college, graduating with a degree in engineering. Here she was the only woman in the first semesters: "Only in the last semester did some women from the East come to the FH. There were many war returnees in my semester. Men who were much older than me".
After graduating, Ingrid wanted to go abroad in the early 1960s: "Since I didn't think I was very talented in languages, I decided to go to the German-speaking part of Switzerland: "I saw an advertisement for a company in the textile industry and thought, I'll go from there. I quickly got a work permit, because Switzerland didn't have anyone trained in the textile industry at that time. Here I was working in textile research".
In connection with a meeting with the ETH, she met her husband. When their joint daughter was four years old, he received a call to Darmstadt as a professor in 1968: "After we arrived here, I didn't work any more and wouldn't have found anything here. I had enough opportunities to do something else that I enjoyed".

They moved to Bensheim, where she still lives today: "Because of the student unrest at the time, we deliberately looked for a flat outside Darmstadt to keep away from it". Ingrid led a comfortable life in Bensheim: "I quickly started socialising, joined sports clubs and rode horses regularly".

Travelling was a focal point of her life, especially as this was easily compatible with her husband's role as a professor, in contrast to his previous position: "We then bought a VW bus and drove all over Europe. Afterwards we spent a lot of time in Canada and bought a cottage there. My husband had previously lived in the USA for five years."
Ingrid's review of her long life so far is very positive: "I've been lucky, things have worked out well for me. Everything always turned out well, whatever my family decided. And today I am still able to keep up with everything. I wasn't very involved in the social sector because I was busy with myself. Politics also tended to pass me by.

Position of older people in their youth
For Ingrid, her mother-in-law was a special person: "She emigrated from St. Gallen to America when she was young, was very independent and worked there for many years. With all due respect to her, we were always at eye level. And she also treated me as an equal. We could talk about many problems without her ever getting into "lecturing". Old people were treated with respect in my own family, but there were also often adversarial discussions at the dinner table. The end of these discussions was not always unanimous. I also decided on my own education. The older ones didn't play up their experience. They absorbed what we younger people brought with us.
Her mother lived independently in her own home until she passed away. Ingrid had hired a carer for her, she herself drove her mother from time to time.  Her own husband was a care recipient in his last years and was cared for by Ingrid until his death in 2015.

Thinking about old age - in the past and today
"From a financial point of view, we looked to maintain our status. That we are in balance, so that not much can happen to us in old age. So we never slipped in old age, we always got out of it well. I would already say that I live the way I used to. And our interests have actually remained the same over all these years, in the past as well as in retirement."

Her social relationships have changed over the last few years. "I'm actually happy with my social relationships, but the old girlfriends are dying off. My immediate circle of friends has died, I miss that already, not being able to exchange ideas. In Switzerland, where I have a flat, I have intensified my contacts. Everyone knows each other when I go there. I don't feel lonely".

To this day, Ingrid regularly travels to Switzerland in her own car and has acquired a dog that she always wanted. A normal day for Ingrid looks like this: "I get up between 7 and 8 o'clock. And the first thing in the morning is always to go out with the dog for three quarters of an hour. That keeps me on track, I feel better afterwards." After that, Ingrid has breakfast, reads the newspaper, does her household chores, knits, keeps her papers in order, cooks and shops. In the evening, Ingrid watches sophisticated films on TV.

Media use
Ingrid uses many media: television (especially 3 Sat and Arte), a daily newspaper, a Sunday newspaper, a dog magazine and a cultural magazine: "I read these newspapers intensively. I don't do anything with computers. I have a smartphone, but I don't use any apps except WhatsApp. I don't use my email address. Some do more with digital media. I did a computer course a few years ago. But that is nothing
Basically, reading forms an important part of her life, it is a great passion of Ingrid: "Reading has always been my thing, even from home. When I was grounded, I started reading. Today I read at least three to four hours besides the newspapers: Non-fiction, politics, biographies, history books. She rarely reads novels.

The role of pensioners in society
"I consider myself an old person, but not a pensioner. Maybe because I have not been working for so many years".
What bothers her about old people is that they always tell the same old "success stories". And not being able to listen so that they can take part in what is happening on a daily basis. She also doesn't like the way society thinks about old people: "Boxes are formed here. That some old people neglect themselves mentally and others cannot grow old with dignity." She also perceives that many people run their mouths over the elderly, while others want to know more about their lives and ask how it used to be.

Ingrid's message to younger people is therefore: "Think balanced and not in extremes when you talk about the old.