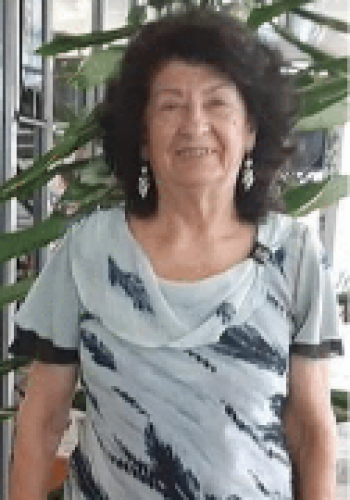 Yanka K. was born in 1943 in the village of Shtraklevo, Ruse District. Her father was a master tailor and her mother was a housewife. In 1950 her parents bought a house in Ruse. She graduated from the Primary school “St. Cyril and St. Methodius” (1-4 classes), the High School “Angel Kanchev” of Ruse and the Vth Vocational High School of Ruse.

Yanka Kostadinova was a diligent, hardworking and persistent student. She was fond of photography, folk songs,dances and Bulgarian customs. She loved math.

She worked in different schools –High Vocational School of Shipping, three primary schools, Secondary school Olimpi Panov, Primary school Kliment Ohridski and finally retired from Vasil Aprilov School. Yanka Kostadinova remarks that it was a dynamic and difficult time, in which with alot of work, perseverance and stubbornness she had to prove herself to students, parents, colleagues and win a place in the team.She has a daughter who graduated from the High Schoolof Mathematics with a gold medal. She then graduated from Sofia University, majoring in Mathematics, and to this day is one of the best teachers in the city. Yanka’s family and her parents lived together, in understanding, sharing and mutual assistance. She, together with her parents, taught her students such values. For many years Yanka K. was chairman of the Methodological Association of Teachers of Natural Sciences and for 15 years she was scientific director of the Club of Technical and Scientific Creativity of Youth. The team and many students have won numerous gold medals in national competitions in various scientific fields.

After marrying a military officer, Yanka K. became a member of the Union of Servicemen’s Wives in Burgas, and then a member and chairpersonof the Ladies' Club "Vazrazhdane" (Revival) in Ruse.

She is now Chairperson of the new Women's Club "Kalina" of workers and retirees, which was transformed into a Club of Pensioners at the Union of Pensioners -Ruse (CP).

Yanka K. remarks that the members of the club live as a family and actively participate, together with members of other clubs and children from schools, in training courses and other initiatives of the CP, the Regional Library "Lyuben Karavelov" and the Municipality.She is currently a member of the Regional Management of the CP and a member of the Resource Center of the Bulgarian Red Cross in Ruse.

She agrees that retirees should help raise grandchildren and great-grandchildren, but should have their own social life and remain active.

Yanka K. believes that the connection between the generations is nurtured in the family and that the young should learn from the older ones so that knowledge and wisdom are passed down from one generation to the next one.

Man is not born educated. That is why the young should learn from the older ones, from those who can and know how to help them to be more skillful, more organized in their work, so that they themselves are satisfied.