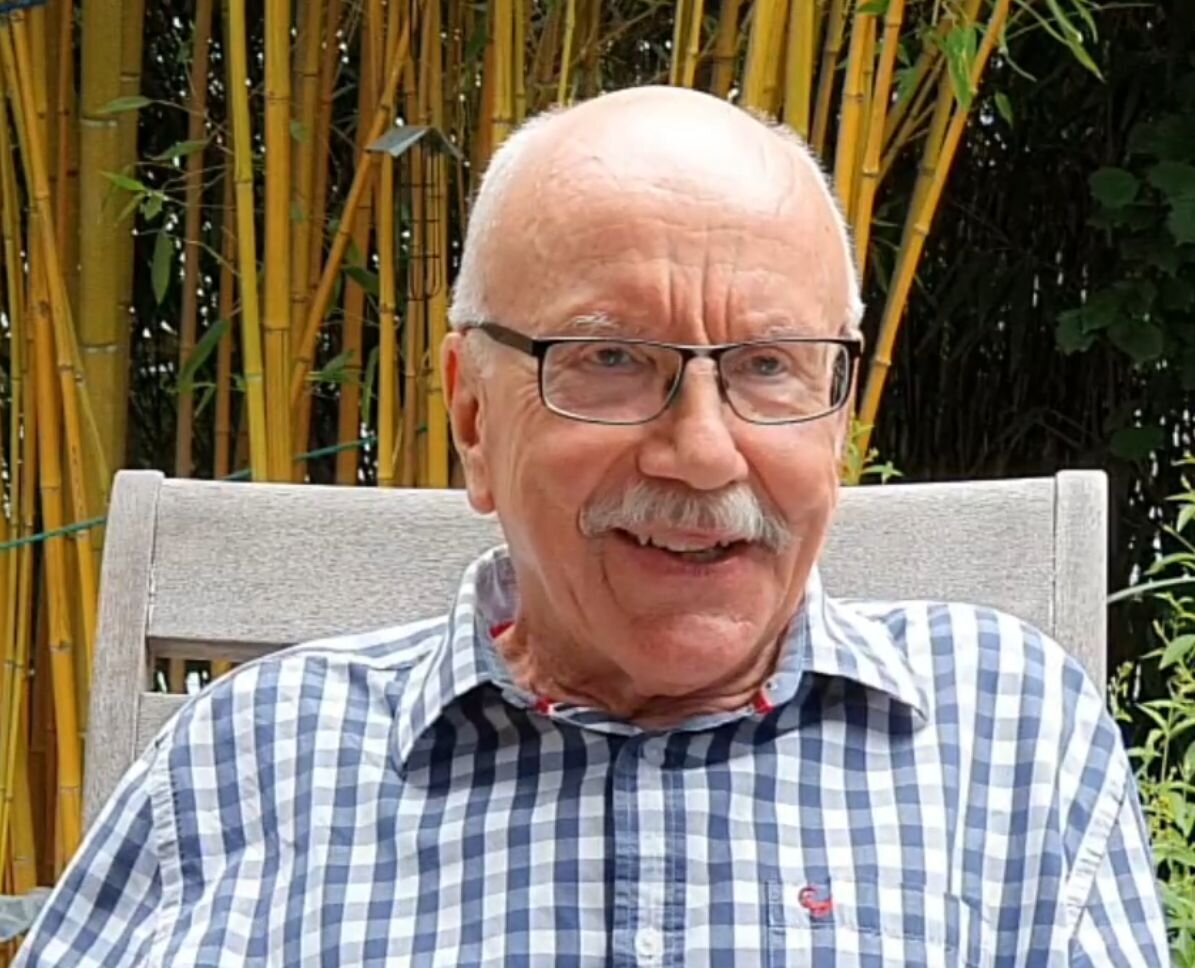 Michael lives in Wiesbaden. Wiesbaden is the capital of the federal state of Hessen and has about 280,000 inhabitants.

Michael was born in 1942, in the middle of the Second World War, and was three years old when the war ended. As he was still a small child at that time, he has only little memories of these difficult times with his parents being refugees. He still remembers vaguely that his mother fled with him and his younger brother from the former Pomerania towards the Harz Mountains, while his father was in the military hospital at that time. They then stayed with relatives in the Harz Mountains. He also went to school in 1948 in the Harz mountains, in an area that later belonged to the GDR (East Germany).

He went to Elementary school in the town of Blankenburg until grade 8. After that time, he moved with his parents to the West of Germany. At that time this was still possible, there was no wall, no guarded border. The family moved to Laubach in Hessen, where continued high school together with his brother. After graduating from high school, he went on to study English and Romance Literature in Marburg and Giessen.

Previously, during his time in the Soviet-occupied zone, later GDR, he had not been admitted to the upper school and had already signed an apprenticeship contract to become a printer. However, this became obsolete when his parents left and relocated to Blankenburg where he was able to continue his studies at school and take his Abitur exam to be able to study.

As you can imagine, it was not easy for him at first as he had neither Latin nor English lessons at elementary school, but Russian instead. He had to catch up on Latin and English. He did however also continue to study Russian in a study group.

During his studies he always worked and was, as he says, in a privileged position as a scientific assistant. This meant that even as a student he had a regular income and could take his time with his studies. However, he did not have an exact idea of what he was to become afterwards. And so after completing his studies, he applied for a lot of jobs and wrote about 35 or 40 applications. At that time the big newspapers, Die Zeit and the FAZ, had a thick supplement with job advertisements.

He decided to take a job at the American University in Beirut, Lebanon. His mother was not at all happy about that, he remembers it well. Michael stayed four years in Beirut at the American University. He describes these years as very formative. He had always been interested in other ideologies and other languages. And he found that Lebanon, "as the melting pot of the Middle East," was a paradise for him, both in terms of the languages spoken there and the cultural diversity. Speaking English, French, Arabic was very normal and then there were the minority languages and the various mentalities.

As chance would have it, Michael met his future wife in Lebanon, a New Zealander who was just passing through. They left Lebanon together after four years to settle in Germany near Giessen. Soon after, they became parents: the eldest daughter was born in 1975, after which the couple had another son and daughter, who were born in Wiesbaden, the family's closest residence.

After returning to Germany, Michael first had a job as a teacher for English and French in Haiger, on the northern border between Hesse and North Rhine-Westphalia, for a few years. In 1976, the family moved to the vicinity of Wiesbaden, because Michal got a job in Wiesbaden as a department head at the then Institute for Educational Planning. This was followed by another professional station abroad, in Australia in the city of Brisbane. Michael describes this time as a very nice time with his family, because his wife was closer to her home country and they often spent their vacations there, in New Zealand.

Michael describes the time in Australia as a fantastically impressive time and Australia as a very colorful country with many immigrants, with many different languages. It is not quite the paradise that many German tourists expect there, the everyday life is not much different than in Germany, but Michael still found it very interesting. After two years the family went back to Germany, to Wiesbaden. There Michael got an offer a short time later to change to the Ministry of Culture, which he did. He remained in this job for 20 years until his retirement. He had a great variety of tasks which were always highly interesting for him. In terms of content, the tasks were very stimulating, and they also involved many human encounters both inside and outside Germany. This included many trips, mostly to European countries. In addition to his main work, he also worked for the OECD and for various Goethe Institutes. He says that he always enjoyed his work and was able to choose a lot of things himself within his working environment.

In 2007 he retired at the age of 65. It was not a big change for him, except that no longer had any deadline pressures. He could arrange his own appointments. He felt that he was in a privileged situation. Retirement was not a big cut for him, nor did he work towards it. He would actually have liked to continue working. He has done this indirectly, by publishing a lot in professional journals. He had already done this in his younger years and he continued this activity even after he retired. In this regard, he notes that one must keep a close eye on developments in specialist subjects. If you don't keep up with the discussions and don't participate, you will quickly lose touch with your expertise field. You need to make sure that you stay involved.

According to Michael's assessment, the new media helps enormously in this respect. What you used to have to research in libraries can now be found on the Internet. There is access to almost everything you need for scientific or technical research. Michael is therefore very well versed in using the new media for his post-professional activities. But at the same time, he finds it very necessary to look for discussion partners. In his opinion, reading at home is only one aspect of appropriating a subject; he considers the exchange with others to be enormously important in order to better process topics. He mentions another post-professional field of activity: after his retirement he continued to advise the Frankfurt University of Music in the area of teacher training for many years, not alone but as part of a team.

In the post-professional phase, he continued to pursue the hobbies he had always pursued, such as learning languages. He has been attending a Spanish course for many years. Furthermore, he has been intensively engaged in philosophy. This is an area for which he always lacked time during his working years. He considers philosophy to be a difficult subject area and spends a lot of time on understanding philosophical texts.

Michael is also still active in sports. He used to be a swimmer, cyclist and runner. Due to his age, he now concentrates on cycling. He pursues this with great intensity, also with many bicycle tours. He does these cycling tours with his second partner, with whom he has been together now for over 20 years. His first wife lives nearby and they meet her occasionally. They take the bicycles on their own planned tours, but also on organize group tours. They also go for walks and hikes and like to watch movies. They also go to the theater sometimes, but not very often. They have a large circle of friends. Sometimes the women are for themselves or the men. Michael entertains some men's “Stammtische” (“Round Tables”), on the one hand with former colleagues, but also with friends, some of whom he still knows from his years in Lebanon, who by chance have also settled near Wiesbaden.

He spent the morning before the interview with his eldest daughter and grandson in various bicycle stores. They were looking for a full-face helmet as his grandson is to attend a mountain bike course. He cites this as an example of the fact that he doesn't have the grandchildren with him regularly, but still cares for them a lot.

He reflects on the fact that his relationship with his grandchildren is very different from his relationship with his grandparents. Much of this was due to the political situation at the time, after the war. His mother's parents lived in Berlin and he remembers many summer vacations there, where he played with other children with enthusiasm in the burnt-out ruins of destroyed Berlin, which was very adventurous for the children as well as being very beautiful. However, it was always a very long trip to Berlin, so he did not have continuous direct contact with his grandparents. On his father's side he never got to know his grandparents. They had already died before he was born. His father came from a large family, he was the youngest of seven children. Michael had uncles and aunts, but no parental grandparents.

He has a lot of contact with his own grandchildren. His oldest daughter lives nearby, so he sees her two children regularly. His youngest granddaughter, the daughter of his son, lives with her parents in Offenbach. The younger of his two daughters is a scientist. She was supposed to be in Princeton at the time of the interview, but due to Corona, she is now in Kronberg and tries to do her work via the Internet and video conferencing.

Michael's hobbies also include photography. As a schoolboy, he already visited a working group for photography and a photo lab. He can therefore develop photos in an acid bath and with red light. Today he does the development work on the computer with image processing programs. On the one hand, he works with the family tree chronicle and creates photo albums for it, on the other hand, he takes a lot of pictures on trips and excursions. At this point Michael mentions that his son works as a post producer, but in the video area. With a wink he asks himself if his interest in photography and film could possibly be genetically determined, since it has been with him for a long time and one of his hobbies is based on it.

Also reading is one of his hobbies. Besides philosophical reading, he also reads a lot of fiction and poetry. His own writing projects are subject-related. At the time of the interview, he is working on an anthology on teacher training. In this way he keeps himself fit in the discussion. Michael also mentions that his pension is satisfactory and that he also travels a lot with his partner, noting that he was fortunate enough to see a good part of the world during his working life.

At the end of the interview Michael states that he is interested in the results of the DENTA project and especially in the comparison of the different interviews.