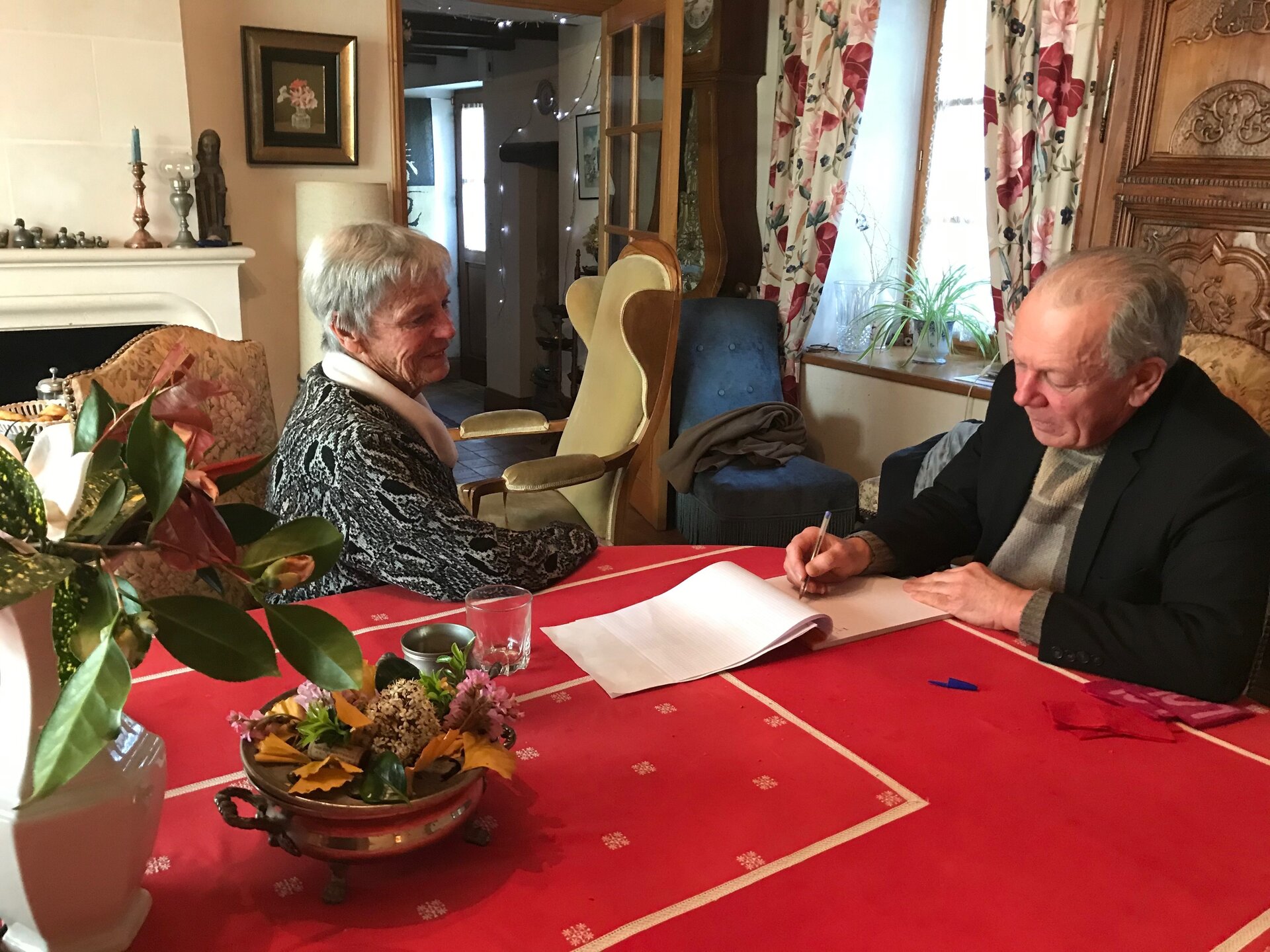 Born: June 19, 1930 in Vannes in the house where she currently resides.

The father, M. Le T. who is a farmer dies of a uremia attack at the age of 38 leaving a 32 year old widow and two small orphans as well as the grandparents of the father who live under the same roof, all in the middle of the German occupation. The mother, Mrs. J. LE T., who has neither the desire nor the competence to succeed her husband, leaves the refugees who live on the farm to manage the farm as well as possible. Mrs. R's farm had indeed been requisitioned, like many homes in Vannes, to accommodate refugees from Maubeuge, Mons and then Lorient.

At the Liberation, the family being in need, Mrs. J. Le T. had to rent the farm and do the housework herself to survive. During the war, Mrs. J. LE T. received resistance fighters on her farm which served as a base for resistance actions but also as a place of transmission and reception of radio messages. Having the rank of sergeant in the Hunter network, she is decorated with the 1939-1945 war cross with bronze star and the French commemorative medal for war 39-45 with Liberation barettte.

In her youth, Ms. R attended the schools of Sainte Thérèse, Jeanne d'Arc, Sacré Coeur and Saint-Georges where she followed household lessons and obtained, at 17, a certificate of professional competence.

She was an instructor in Ain until 1956, the year she married MR, veterinary surgeon. The couple who will have three boys will settle in Mayenne until 1994 year when her husband will retire. The oldest child unfortunately will die at 21, the second will be a pharmacist and will remain single, the third sound engineer will marry a Japanese woman and will have two children.

Throughout her husband's professional life, Mrs. R. will assist her husband as a medical secretary but without contributing to her retirement. The family will travel a lot during this period and will acquire a vacation home on Île aux Moines.

Ms. R. lives today with a very small retirement but has a very good standard of living because she has her husband's survivor's pension and income from several apartment rentals. She is happy but feels old age (90) and when asked that she will have been the golden age of her life, she answers her professional period. However, she still has morale and is optimistic. She is in very good health and does the housework and the garden herself.

She drives her vehicle without problem. She never gets bored and has a lot of occupations. She loves culture, often goes to the theater, sees exhibitions and also attends cinemas. She often watches television, especially Arte, and listens to the radio, but no longer reads the press. She has a whole network of girlfriends and she often plays tarot with them, once at one, once at another. However, she does not have a computer. During the summer period, Mrs. R. lives in her residence on Île aux Moines.

Her relationships with her two children are frequent but she regrets that, concerning her two grandchildren, Japanese culture prevails.

She does not plan to go to a retirement home, but has planned with her children to have the assistance necessary to keep her at home.

Her sister lives not far from her, but they have seen each other more rarely since the latter's husband died.