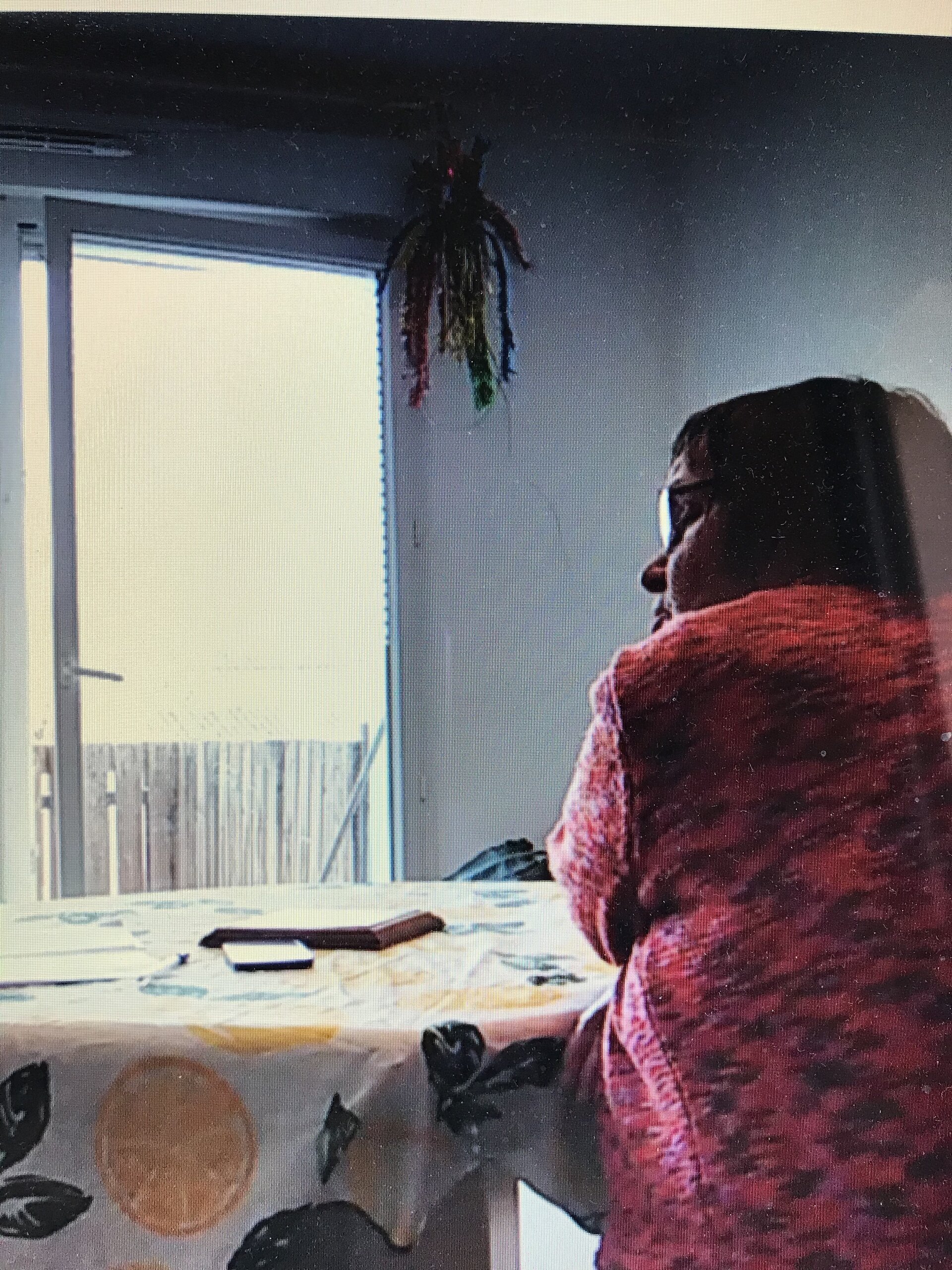 French, Eliane F. was born in Nantes in 1951 and at 69 years old, she now lives in Bouaye on the first floor of a small bright building.

Eliane lived in The Martinière Canal with seven brothers and sisters, with whom she used to walk to school. About seven kilometers from the house, she walked to Pellerin twice a day. But never alone, others were joining her on the way. Once, they were able to get on a gentleman's cart, but the man, annoyed, brought them down as soon as he saw them. At eight years-old, when her parents separated, her mother had to go to work. Eliane is then sent to Troie, boarding with the good sisters, where she could continue her education in a public school and where she notably receive her communion. She really enjoyed being with the nuns, with whom she traveled a lot: Italy, Belgium, Luxembourg and Switzerland. Returned to her native land at the age of fourteen, she continued school until she was seventeen in Frossay, where she traveled there on a moped. A few kilometers from her home, she then learned in addition to lessons, sewing, cooking and ironing.

"It was to continue school, because at fourteen what will you do if not?" "I had to do something" So, she makes a dress for her little cousin, for instance. Eliane then worked from the age of nineteen on gut company, making strings made with beef gut for musical instruments. She met her husband there, who has since died. He was a driver there, and they did meet at the café, in which they both used to go during the break. Sometimes she would travel with him when he took her in his truck. Trips too, when they regularly went to La Flèche or in Corrèze, a region she loves very much. So together they got married and had four children.

As a child, Eliane also often went to see her grandmother with her sisters, she lived a few streets away and on Saturdays they went to do her shopping at the market. She does not know if her retirement was difficult in her day, because she was too young to see it, but "today it is difficult", "we tighten one's belt". But anyway, she says, she never goes to the doctor because she "doesn't feel bad, I'm fine." Her retirement life is rather dynamic, she goes to see her grandchildren, because "they are there, it's good to see them! " She is very happy when they also come to her house. Also, Eliane knits and walks her dog, because "it is necessary to go out it, the small animal". Rather comfortable on the internet and social networks, she plays on the computer and the tablet and in particular she helps one of her sisters when she needs it because she does not have access to it and despite her great form, she wouldn't use it. So hardly any place for boredom. After out of bed at dawn, she begins by walking her dog and systematically meets her son who leaves on a motorbike to work, his dog barking after him. Then after having breakfast herself, she feeds her dog and does not hesitate to respond to the song of her bird. Very mobile, she goes to see her children and her "sis" regularly, not to mention her cousins in Poitiers with whom she has kept in touch despite certain deaths and the distance.

There are also her work friends, despite the fact that she failed to get back in touch with a friend of hers. In addition, after the death of her husband in 1993, Eliane had also worked at the town hall of Bouaye, her city of residence. She started by the cleaning, then washing up in the canteen, not forgetting the traffic officer, that she loved to do! Indeed, she greatly appreciated greeting the bus drivers and chatting with the passers-by who was crossing. She would do the traffic officer again well even if she does not think that the town hall would like to resume her today and after reflection, this would be an hourly constraint no negligible in her already well-paced days.

For Eliane, the role of retirees is first helped children and grandchildren, a role and above all a presence because there is no question of education, there are indeed rules which are not there at grandma's! To the younger generation, she tells them to take advantage of youth above all, to work well and to do what we like!