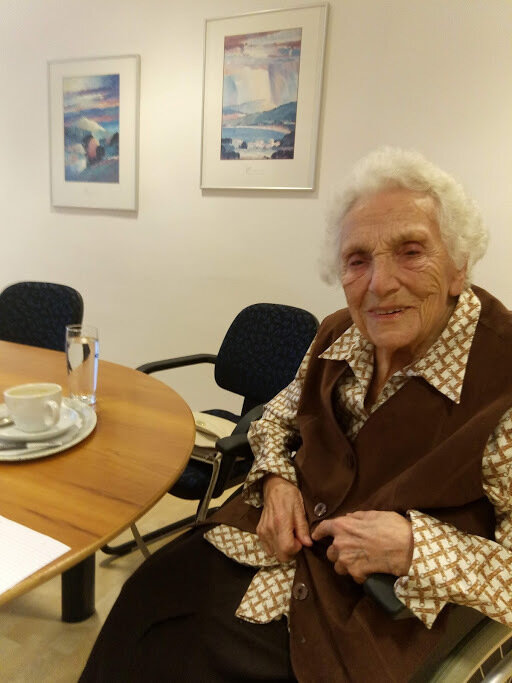 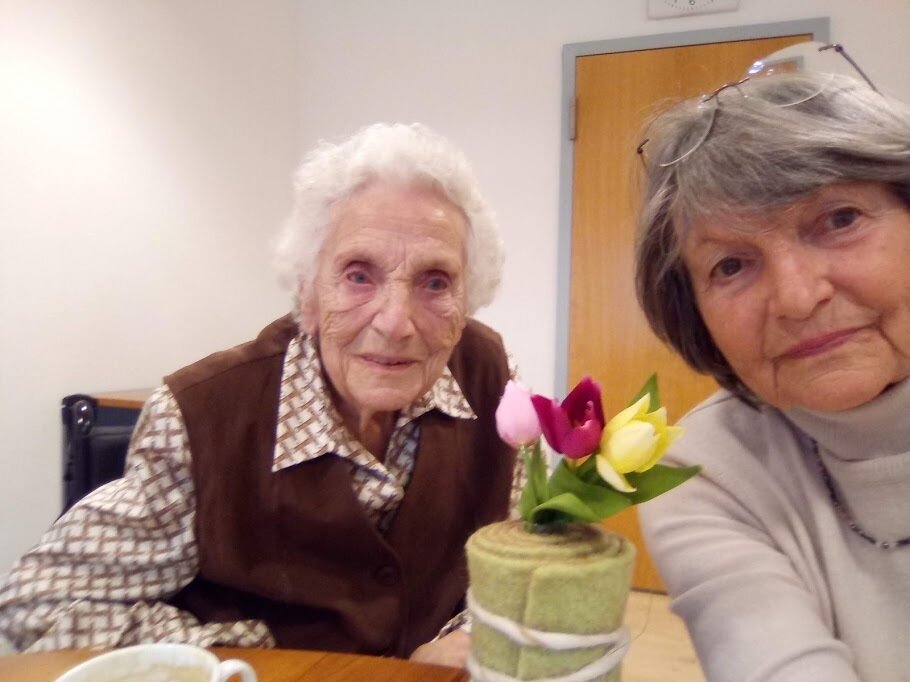 Making contact on Women's Day (Interview with Erika B.)

Erika B. was born in 1918 in Kharkov, Russia, to a Baltic German merchant family. Her husband died in the 1960s. As a mother of two children she had to bring her family through as a secretary. Erika B. now lives in a nursing home in Memmingen, Bavaria. She reads newspapers and books with the aid of a reading magnifier, her phone has a highly sensitive amplification, enabling her to communicate intensively with her children, friends and relatives in the USA. She is very lucky to have always met interesting people, says the 102-year-old woman.

Ms. B., you are 102 years old and have worked and lived in Ulm for many years. Why do you now live in a nursing home in Memmingen?

I lived in Ulm until the age of 80, in a downtown apartment on the third floor without an elevator. But climbing stairs became more and more difficult for me, and I soon looked around for an apartment in an assisted living facility. All offers in Ulm were too expensive, so I searched in the wider area. I got an offer from Memmingen that was affordable for me with my pension. I was even able to take my piano into the pretty two-room apartment with me.

How did you manage to settle in Memmingen?

Because I have always been sociable I soon made friends with a few co-inhabitants in the house. But I also looked for new acquaintances in the city of Memmingen. So I read in the newspaper about an event for Women's Day where I went with great curiosity. There I got to know a group of women with whom I then met regularly. I have made friends with some of the women, with whom I still have contact today. The group also started a women's history workshop, which is currently preparing a book about Memmingen women. My biography was also included in this documentation.

But why do you live in the care sector now?

After a hip operation in Memmingen, at the age of 85, I could hardly walk. My eyesight became very bad, my hearing deteriorated more and more, so now I can only live with the help of technical aids. First, I moved around with the help of a rollator or in an electric vehicle that was parked in the underground garage. They enabled me to do shopping outside of the house for about five years. Today I am in a wheelchair and need care. Ten years ago, I had to move to the nursing care department. Now I only live in one room apartment. I had to sell my piano.

It was surely hard for you. Who are you in contact with now?

The nurses are lovely. They come from many different countries, and I have interesting conversations with them about how people live in their homeland. A Polish woman always tells me stories about her family when she returns from vacation. I like to speak in Russian with a young German-Russian nurse from St. Petersburg. In the meantime, I have met other nice people from Memmingen. I met a nice lady through the protestant parish newspaper (Evangelisches Gemeindeblatt) where she offered visiting services in a retirement home. Now she regularly takes me out for a drive. walk. This way I also got to know a very educated gentleman, who delights me with his visits. Another great acquaintance I made in my orthopedist's waiting room. A young woman from Northern Germany helped me find my dropped hearing aid. We started talking. Since then she has been visiting me every two weeks and we are talking about God and the world. Sometimes she takes me in my wheelchair to eat in a restaurant.

What do you do, when you are alone in your room?

I love to read, but I'm almost blind. I got a high-tech magnifier from the health insurance company. I love to read old novels from Russia, where my mother came from and where I was born, and I also like the great works by Wilhelm and Alexander von Humboldt or Albert Schweizer. I don't like audiobooks so much, because my hearing aids are not yet sufficiently adapted to it. On TV, in addition to the news, I like to watch films about animals, but I can only see the landscapes and the animals blurred. Until recently I also listened to the lectures organized in the house. Unfortunately, this is no longer possible due to my hearing weakness. I would therefore like to see the development of new technologies that would make easy-to-use hearing and visual aids for people who are almost blind. .

My son from Ulm and my daughter from near Augsburg take great care of me and visit me as often as possible. Sometimes their children, my four grandchildren and their children - my great-grandchildren, come to visit me as often as their work allows. Twice a week I make phone calls to my family members in the United States and Canada, where my two sisters emigrated after the war, and where a large family has grown since.  Unfortunately, my sisters died, but I am still in close contact with my nieces and nephews and their children. Last year all the relatives from America visited me one after the other. It was a wonderful experience for me.

How was your previous life?

I spent my childhood and youth in Latvia until the outbreak of World War II. My father, a German, worked as a steel trader in Kharkov, Russia. After the First World War and after the troubles of the Russian Revolution he emigrated with my mother and me as a baby to England, then to Finland and finally in 1923 to Latvia. There he found a good job in the textile industry. He bought a house for our family in Riga in a forest near the Baltic coast. With my two younger sisters I experienced a paradise there.

When did this paradise come to an end?

In 1939, after the German-Soviet non-aggression pact, we were suddenly relocated with 70,000 Baltic Germans to Poland. For us, the time in Poznan, our new place of residence, was somewhat peaceful. I trained as a pianist at the local conservatory. In our house I met a young German doctor from Latvia, whom I married shortly afterwards and soon had two children with him.

And after the war?

When the Russian army invaded Poland, the motto was: head West. I caught one of the last trains with my two babies, my sisters and my mother. We ended up in a refugee camp in Weimar, which was initially American-occupied. When the Russian occupation threatened us, and the abduction to Siberia, we fled further West. A farmer took us on a horse-drawn carriage through the Thuringian Forest across the border to Bavaria. On foot and with occasional carpooling with local farmers, almost starving, we continued our way to Heidenheim, where, at an address we both knew, we finally met my husband again , who had been captured by the English after his escape from Poznan and released in 1946. We lived there for a few years in in the bitter post-war conditions in makeshift refugee shelters.

When did things get better again?

1948 my husband received the permission from the Medical Association in Langerringen near Schwabmünchen to take over the praxis of a retired country doctor. Everything was very primitive there, and the next city of Augsburg was far away without a car. After difficult eight years, in 1956 we finally opened a modern medical praxis in Senden, where I worked as his secretary and assistant. Unfortunately, my husband suffered a cerebral hemorrhage a half a year later. He lived in the care of our family until his death in 1965.

That means you had to earn the money then?

Yes, I had to support my children alone. After graduating from high school I was educated at an interpreter school in Leipzig, and so I could work as a secretary in various government offices in Ulm until I retired. I worked for example at the University of Design (Hochschule für Gestaltung), at the secondary school office, the Ulm University and finally in the University Dean's office (Dekanat).

What did you do after you retired?

I enjoyed my first 15 years of retirement traveling to Austria, Italy, France and England, or flying to relatives in Canada and the USA. I played my piano as a voluntary support of singing and music groups. I still have good contacts with some of the participants today.

Do you find it easy to make contacts?

Yes, I think so. I can think of an example: A friendship developed when I passed the Ulm Museum on my way to the senior gym and saw a rather desperate English-speaking couple standing there. I asked them ‘Can I help you?’ I learned that they were from London and had lost their tour group. The bus was supposed to leave for Vienna an hour later. I was immediately ready to show them a little bit of the old town of Ulm and then lead them to their bus station. This acquaintance led to a long friendship. I flew to London several times and later I also received these dear friends at my home in Ulm.

How would you describe your life motto?

In my life I was always very lucky to meet interesting people. In my job or while traveling, even today in the nursing home, I always get into a deeper conversation with people. I try to stay curious and open also in old age. This is how I learn interesting and exciting life stories.