Rayka was born at home in the presence of a midwife on November 10th at 6 pm but was registered November 11th at the municipality. The family lived in a house of their own, she had a brother – 8 years younger than her. Both her parents families were big ones – each had seven children. Together they had very happy celebrations and holidays throughout the years. Her grandfather was killed on July 25th, 1916 on Mount Kovil, Macedonia when her father was only 10 months old. Then, his mother passed away when he was twelve years old and he became an orphan. Nevertheless, being an orphan, he became a carpenter's apprentice and took his exams. He obtained a carpentry certificate in Burgas. He bought land and built a house in Karnobat. Then he got married. The house had three rooms – kitchen, bedroom and a living room, next were the bathroom and the toilet. There was electricity and water supply inside. Her father made most of the furniture in the house and even when her mother entered it, there was coffee cup set. In the yard they took care of chickens and pigs.

Rayka’s father took care about children of his brothers and sisters, who lived in their house while studying in Karnobat. Her father had a private business and there always was food at home. He helped his siblings with food, as well. He paid for the clothes and textbooks of his nephews, if a relative needed a medical treatment – he took care of it financially.

Rayka’s mother was a great-granddaughter of Mr. Dimitar Popov, an MP from the Bulgarian Agricultural Union. Popovi family came from Edrine. Her great-grandfather was a priest in the village of Zhytosvyat /Karnobat region/, he made large donations for the construction of the school and the Chitalishte (community center) in the village. Her mother by education was a seamstress. “She was smart, loved literature, French language and the arts - she was drawing very well. She painted the sets for theatrical productions in the Chitalishte (community center) in the village of Zhytosvyat and participated in the “Khan Tatar” performance.”

Rayka started school when she was six years old. She was disciplined and organized student. Her favorite teachers were Mr. Georgiev – Bulgarian literature and language and Mrs. Petrinska – French language. Interestingly, Mr. Georgiev’s daughter is now teaching one of Rayka’s grandson. “I was proud when my French language teacher walked me through the classrooms to greet the other students in French and then patted me on the back saying „Сеса, сеса”.

She dreamt of becoming a teacher and entered the teaching Institute in Burgas in 1963. After her graduation in 1966 she was appointed with a scholarship to teach in the regions of Yambol and Burgas. When she was teaching in the villages, the rent for her stay was paid by the “Education” Department. Her first salary was 60 BGN that ensured her with everything needed – clothes, shoes, food and some money to go on vacation or excursion. She practiced her profession for 35 years and retired in 2000 with a pension of 58 BGN. She taught in Sadovo village, Burgas region where her future mother-in-law also worked and arranged to introduce Rayka to her son in the grocery store of the village. They also met each other often at the bust stop for Karnobat. In July 1971 he proposed to her but she said NO because she wanted to have an autumn wedding. Thus, a year later they engaged and on September 10th, 1972 in Sliven they got married. She adapted easily to the family life as they lived by their own, were young and had the same worldview. The children went to nurseries and kindergartens because the parents were living away and took care about them only during the summer holidays. The children grew up respecting the elderly people within the family. The same year she went to Sofia to the Institute for Teacher Training and since then she has been working in Sliven.

Rayka worked as a team leader through all three levels of student organizations that existed in schools before 1989. Rayka was 25 years Chairperson of the Chitalishte (community center). In 1975 her first child was born and in 1977 – the second one. The family managed to buy an apartment, car, to educate their children thanks to their hard work. Often they went to holidays and excursions. Every year she visited her several cousins in Burgas and they swapped houses – her family went to the sea, and theirs went to the mountains in Sliven.

Almost every weekend they received guests but things changed after 1989. Both parents, on her and her husband’s side had good pensions but after the changes their pensions were reduced with 50 % and until their 86 years of age they took care of them. 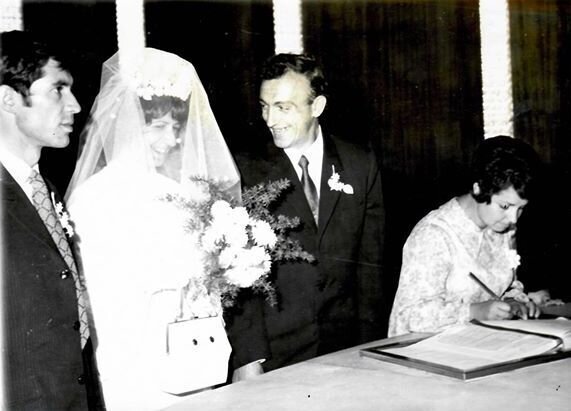 In her young years Rayka did not imagine her retirement time. Most of her free time was devoted to public service – her work in the Chitalishte (community center). After retirement she managed to support her children with the bringing up of the grandchildren which satisfied her greatly despite of the small pension. She has four grandchildren – two boys and two girls – and stared to work with them when they were only a year and a half old. Her greatest reward was their recognition: „Grandma you taught me to read and write” and “You taught me to love books”. Also, the teachers’ recognition when they evaluated the knowledge level of her 3-year-old grandson as if he was a 6 years old. Her daughter-in-law proudly admitted that her mother-in-law was a teacher. “My heart was warmed by the greetings of a school principal who said that I have brought up my grandson superbly” – there could not be greater award than this! The most important events in her life she defines to be – the birth of her children and her grandchildren.

She is living with her husband who has multiple diseases and more funds are necessary to ensure treatment for him.  Currently, her pension is 238 BGN (122 Euro). Thus, their children help them financially. “Our pension is not sufficient. If I am to live alone, I will not be able to pay for electricity and water supply.”

During the vacations she takes care for the grandchildren and works with them. The rest of the time within the year, she is sewing Bulgarian embroideries and loves to read historical novels ensured by her daughter, who is a librarian. She hasn’t bought books since her retirement due to their high price. Also, she hasn’t visited theater performances because of the high price of the tickets. Mainly, she watches Bulgarian National Television (one public channel), their daughter presented her father with a computer and a smart phone which he uses and connects with the children who live away.

“My motivation is to live and communicate with young people, my hobby – to collect and sew Bulgarian national embroideries, collect data and information for the family history to transfer it to my grandchildren.” In their home during celebrations and holidays all Bulgarian traditions are maintained and observed as they were passed down for centuries in the family. She had prepared four family meetings.

She initiated the activities related with beautification of her great-grandfather grave, who was a priest in the village of Zhytosvyat. She took there her grandchildren, whom she is raising to respect the family memory. It was important to her that they could learn the history of the family and personally take part in the commemoration. “The Sliven diocese presented us with quality literature for children's education. It was a lesson in patriotism.”

When her grandchildren entered the library they already knew the alphabet. They paged through the beautifully illustrated children’s books. The grandchildren are thankful to her because she brought them up to love and appreciate the good books.

“The young generation should be more responsible for the patriotic education of their children. It is not difficult to bring your two-three year olds to theater and concerts, in order to give them an opportunity to fall in love with the Bulgarian songs and authors.”