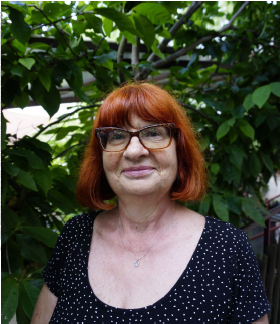 Interview with Dragana A., Magister of Drama Arts was held in Belgrade in her family apartment. Her husband Nenad was babysitting their grandchild so we could talk in piece in her study room. Study room is full with books; bookshelves are from the floor to the ceiling on two walls whereas on other two walls bookshelves are smaller. Among books are also comic books and music records, which she sometimes plays on phonograph also placed in the room.

Dragana will be 70 years old in 2020. She is a mother of two and has three grandchildren. She lives with her husband and they have three dogs and two cats. Two dogs are in the yard, in dogs’ houses, whereas the third, Zrnce (Petty Grain) lives with them in the house because of old age.

Dragana is a writer and she shared her story in a concise manner without unnecessary details. She started talking about herself as a person who grew up without family name. Her family name A. is actually her deceased first husband. Her father left her and her mother when she was still a toddler. She added that her Christian name is Ružica (Rose), because she was baptized in Church of Holy Mother also known as Ružica in Belgrade.

She was born in 1950 in Belgrade and her parents were very young – both were 19 years old. They married quickly and as she notes, „just passed to her Grandma and Grandad to take care of me.“ Soon after, around her first birthday, her father moved to Canada. Later on, when she was 11 her mother moved to Zagreb (Croatia) to sing in Croatian National Theatre opera. Grandma and Grandad were her family. They were both also young– Grandma was 39 and Grandad 42 when she was born. Grandad was very supportive for all her ideas including the choice of high-school and enrolling Faculty of Drama Arts in Belgrade, whereas Grandma was skeptical and a bit old-fashioned regarding girls in education.

She lived in Humska Street in Belgrade, near Stadium JNA (Sport Society Partizan). She went in elementary school “Vojvoda Mišić“ and then in 4th Belgrade High School. She enrolled Dramaturgy Department at Faculty of Drama Arts in Belgrade, one of altogether five accepted in the generation. Since she was top student she received Radio and TV Belgrade scholarship. After she graduated she begun to work in RTV Belgrade for next 40 years, until retired.

She remebers herself as pretty „wild“ child. She was constantly defending weaker and often fought though she was rather petite. She never closed her eyes for injustice and advocated rights of unpriviledged. Even at Television Belgrade she was open to express her opinion and many thought of her as „whistler“ who has a background but she says that she only have hed herself. 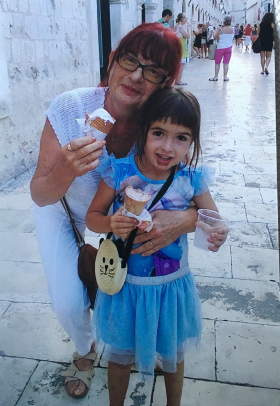 For a bit more than six months she was an intern in ABC News in New York City but eventually when she was offered to stay she refused and returned to Yugoslavia. She also received working offers in other countries but she decided that Yugoslavia is the best country for her to live.

With her first husband she has a son Filip and a daughter Anja. They both live in Belgrade. Filip has one child and Anja has two. Her first husband died young, when he was 37, of a heart attack. They travelled a lot across Yugoslavia and abroad. She says that it wasn’t happy marriage, though.

Her favorite country is Italy because of its people and history. She finds Italians more open people than Serbs and Yugoslavs.

Dragana is a proud woman. She is revolted by how many seniors in Serbian society act. She says that their lost their dignity. In the struggle to survive they don’t care much about younger generations and their future. She is determent in opinion that certain socio-political structures should be changed. Also, way how seniors in Serbia think should be also changed for the benefit of all.

Her health is good. She practices yoga and walks her dogs every day. She says that she has a very special relation with her pets. She loves spending her time with them. She was particularly fond of her cat Pamuk (Cotton) who inspired her to write 60 stories published in magazines.

In recent years Dragana has changed her cultural habits. She is revolted by changes and reconstructions in the City of Belgrade and because of this revolt she withdrew from cultural activities. Earlier, she was regularly attending festivals, concerts, went in theatre and cinema, etc. She loves classical music but sometimes she likes to listen other music genres. She watches television, listens radio, reads newspaper and uses Internet on a daily basis. She is also using social networks and often comments socio - political situation.

Just at the end of the interview she talked about Nenad, her second husband. He was her coworker in Television and he is several years younger than her. Because age difference she hesitated to get involved in a relationship with him. Then, one day he rang her doorbell, having suitcases with him, and said “I’m here!” Since then they are together, for 25 years.

Talking with Dragana was very relaxing. Even when some difficult subjects emerged, we addressed them with lots of humor. Although some situations in her life were extremely difficult, she never allowed difficulties to stop her, she kept going and fought. She mentioned in several occasions that she was growing up without (parental) love but she never allowed her children and grandchildren to suffer the feeling of lack of affection. She kept trying not to repeat her parents’ mistakes and make her children feel very loved. She had closer relationships with her Grandad and (maternal) uncle.

She never experienced inconveniences because of her age. Message she sends to younger generations are to learn and be educated, to read, to travel, to meet other people, to use their own heads for thinking, to be open for the world and think green.