We are in San Giovanni Suèrgiu in the house of Mr. Eraldo S..

Mr. Eraldo, when were you born?

And how did you two meet?

I was at the mill, driving and getting the durum wheat to grind. Once, by coincidence, it happened that I went to her house to look for wheat and on that occasion I met her and we started dating. I still remember that we met for the feast of Santa Greca, in a nearby village, but we could not meet because one of us went there on Saturday and the other on Sunday. Then there were no mobile phones! To this day we have been married for sixty-four years and it doesn't seem true!

Mr. Eraldo, tell us a little bit about your life before you met your future wife.

Mine has been a bit of an eventful love life and in the places I've been when I was in the military I always looked for company. A girl I met in the army even wrote to me when I was already engaged! It is also when I was in Russia I did not miss the usual adventures, but when I left to return to Italy with these girls, despite promises, there was no longer any relationship. I stayed in Russia for 17 months. In six years of military life I never took a leave.

And do you remember any particular episodes from that time?

Yes, I remember a time when during a transfer trip we came to a station where there were wagons loaded with tanks containing diesel and gasoline. And I, who was in charge of refuelling in the department, was sent to "pick up", to practically steal what we needed. I managed to fill four of the six drums we had brought and loaded them onto our truck before three Germans intervened and even emptied what others had already taken.

On the way back to the barracks, the major asked how it had gone and got very angry because he thought we would have to fill all the barrels and he didn't want to listen to reason. A lieutenant had also accompanied us to get the fuel, but the major who commanded the battalion, however, only took it out on me.

The lieutenant got all the credit and I, as punishment, was sent to the front line where I stayed with my company for thirty days on the banks of the Don. We were later returned to Italy and I was sent to Cagliari where, when the alarm sounded, I had to gather my companions to escape to the refuge. It was a situation that I didn't like and I asked to be transferred and so when the opportunity came to move to Muravera I immediately took advantage of it. It was fine and there was no danger and so I found myself a girl to cheat the time. Just so I wouldn't lose the habit. 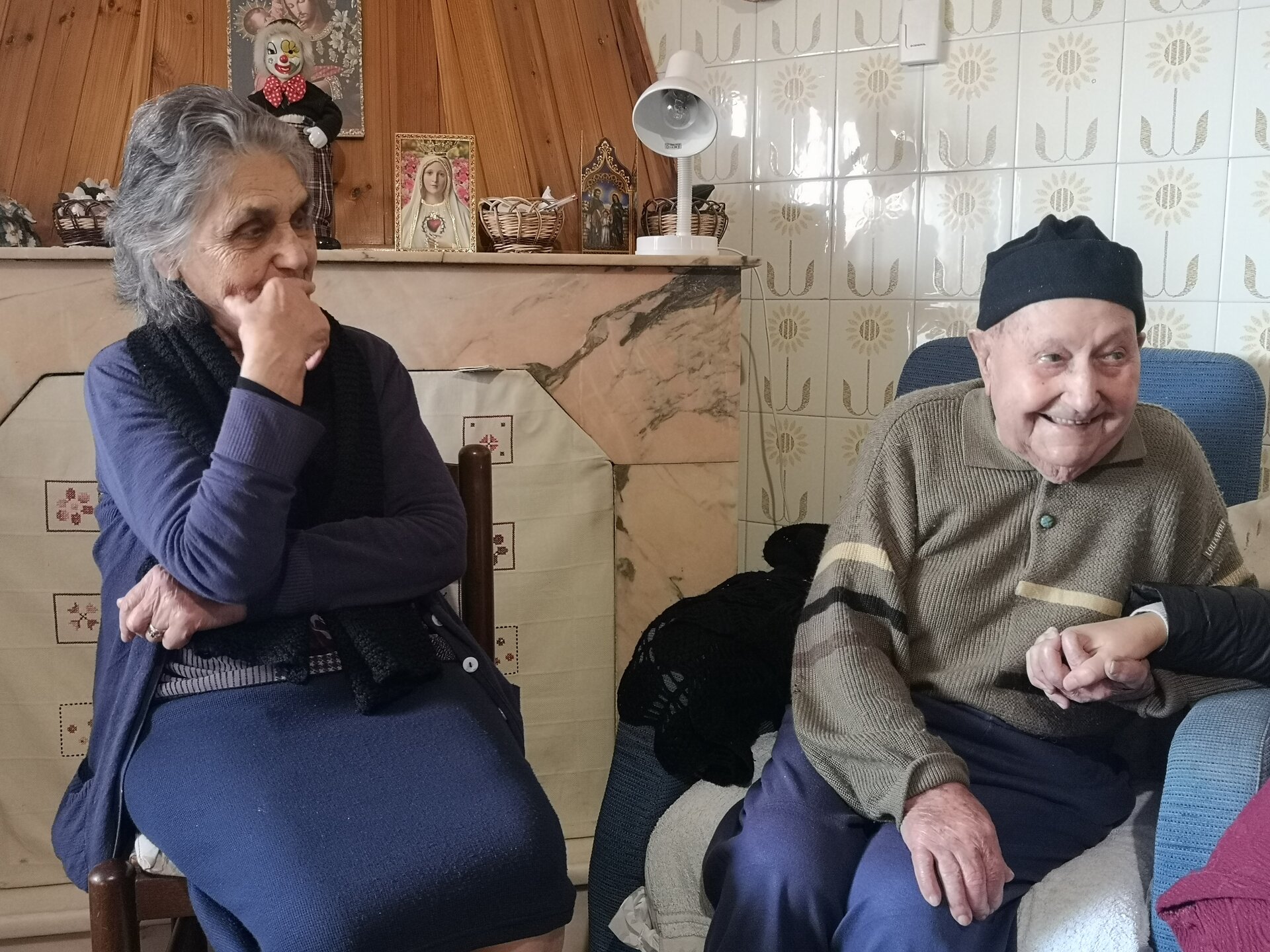 But when you got married here in San Giovanni.

No, we got married in my wife's village, in Santadi, and then we went back to San Giovanni, where I had a brother priest, whose presence, among other things, had immediately convinced my father-in-law to accept my proposal to marry his daughter.

There were ten of them in my wife's house, and eight of us. There are currently eight living in my wife's family, and there is also a nun. Me a brother priest, my wife a sister nun! For the first year in the family they were all worried because there were no children. But at the end of the first year came the first one, a girl and 2 then the second and third, with great disappointment on my part that I was expecting a boy, but he did not delay to join the family.

Mr. Eraldo, you worked at the mill and then you had a gas station. What were those post-war years like?

I used to work at the mill, like I said. I used to go and get wheat in Cagliari and sometimes we would also go to Sicily. In the meantime I was also taking care of a distributor where two guys were working, but in the end I was practically forced to make a choice because they didn't accept any frontmen and so I decided to take care only of the distributor.

And in those years, when the kids were growing up, what did you do? Did you go to parties? How did you have fun? Or was it just work?

Parties weren't all the time he was busy with work. When I went to Cagliari with the truck to pick up the grain, I left at four in the morning and returned late at night. But all in all, it wasn't a bad year.

Did Mr. Eraldo go to school as a child?

Except for one brother who became a priest all the others we only went to elementary school. And then, after the age of 14, to work. One of the brothers had worked at the power plant of Santa Caterina, in the municipality of San Giovanni Suèrgiu. 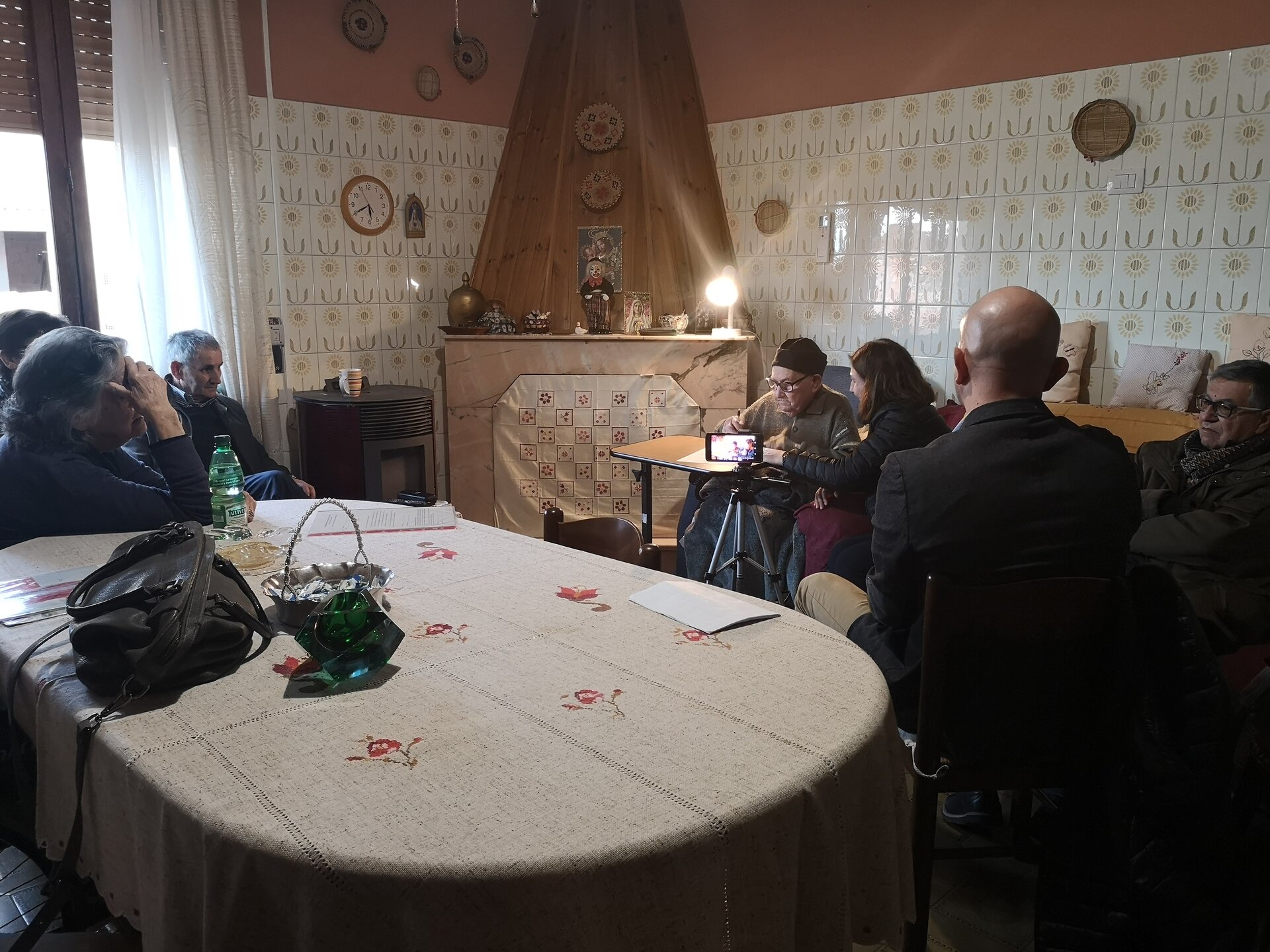 What did your mother and father do for a living?

My mother was a housewife, my father was a shoemaker and had as a laboratory a whole room where he made shoes and fixed them. My father-in-law was a small owner with a dozen or so workers. He had sheep, goats and cows, but his wife died when he was forty-four years old and had to take care of the children too. A great helping hand at that time was given to him by Maria, twenty years old, the eldest daughter who took care of her younger sister practically alone. Maria was also passionate about sewing, so she was the one who provided for all the needs of the family. Then she continued to work for the grandchildren as well.

Mr. Eraldo, did you ever think you'd make it to a hundred years and get over it? And how do you spend your time today?

I see the television and if there's a game, I never miss it. I used to read the paper until recently, when I started having some vision problems. I listen to mass on Sundays and I remember when I was an altar boy as a child.

I eat everything, but these days I don't find meat particularly tender and I prefer fish. The fishmonger came by again today and my wife bought it. I had a really good meal. My wife is particularly fond of vegetables. I also prefer a glass of wine. 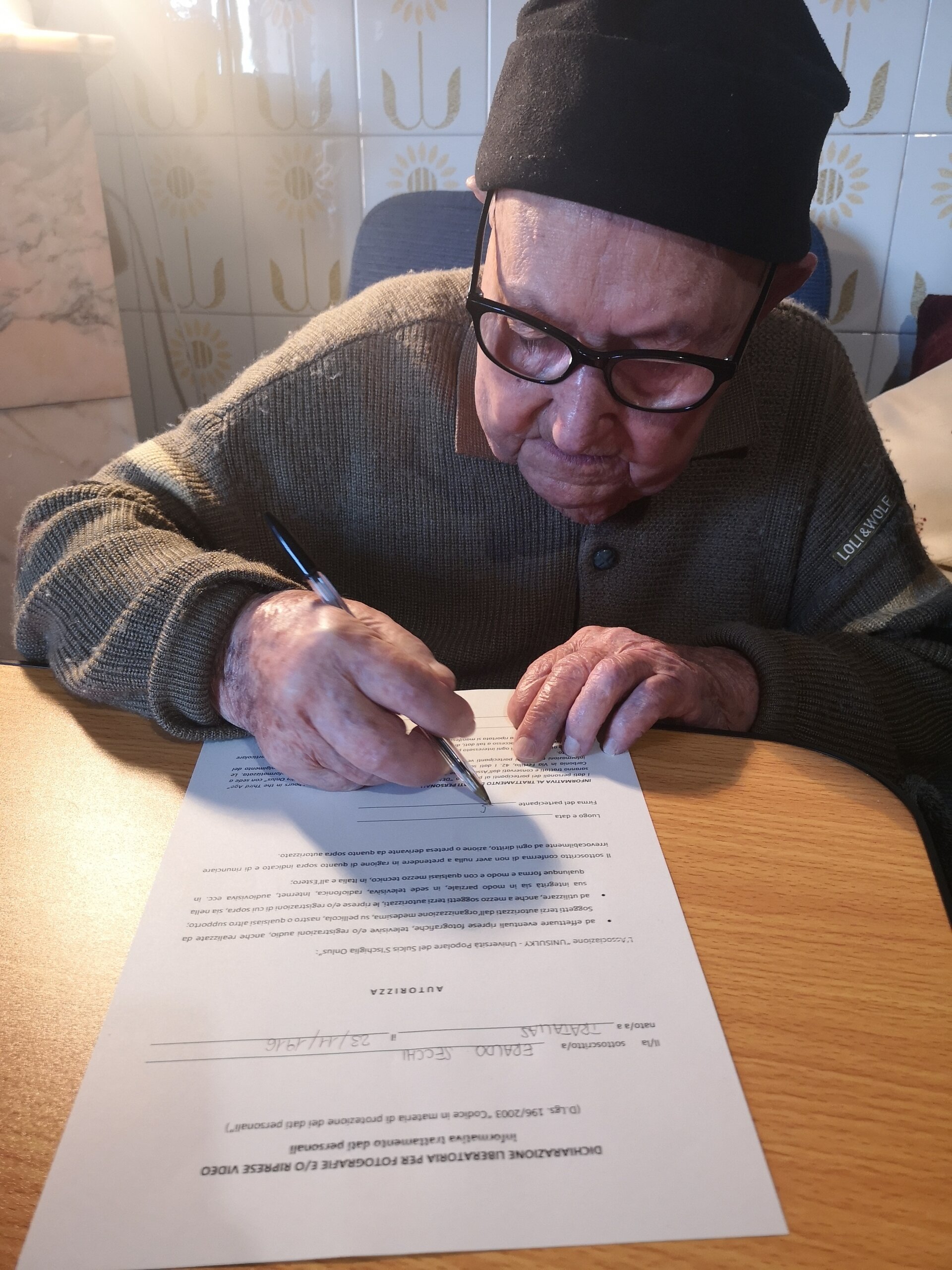 Perhaps the cheerful, calm, optimistic character... I had four operations, but everything always went well.

And now the grandchildren are coming to visit? And how many are there?

There are six grandchildren, eight great-grandchildren. Yes, they visit me often. Some were here last night too.

Now you also dedicate yourself to interviews and tonight you have also met the mayor woman who is just having this beautiful chat with her in the wake of many beautiful memories still so alive in her memory.

I knew the Mayor was coming to see me today, but I wasn't thinking of a woman mayor. I, however, have never been interested in politics, even if I saw that many others cared too much and that they were playing the devil to get a public office.

But when you were young, do you remember people who lived as long?

No, there weren't any. I lost all my friends, several of whom died very young.

And has San Giovanni changed over the years?

A lot. For example, here behind the house was all country and stagnated in a kind of swamp full of mosquitoes, but where I remember that we also caught beautiful eels.

Almost at the end of the meeting the son arrives with his family and Dr. Elvira Usai, mayor of the village and interviewer of our nice centenary, explains to him the purpose of the meeting at his parents' house and of this pleasant, interesting chat with his father.