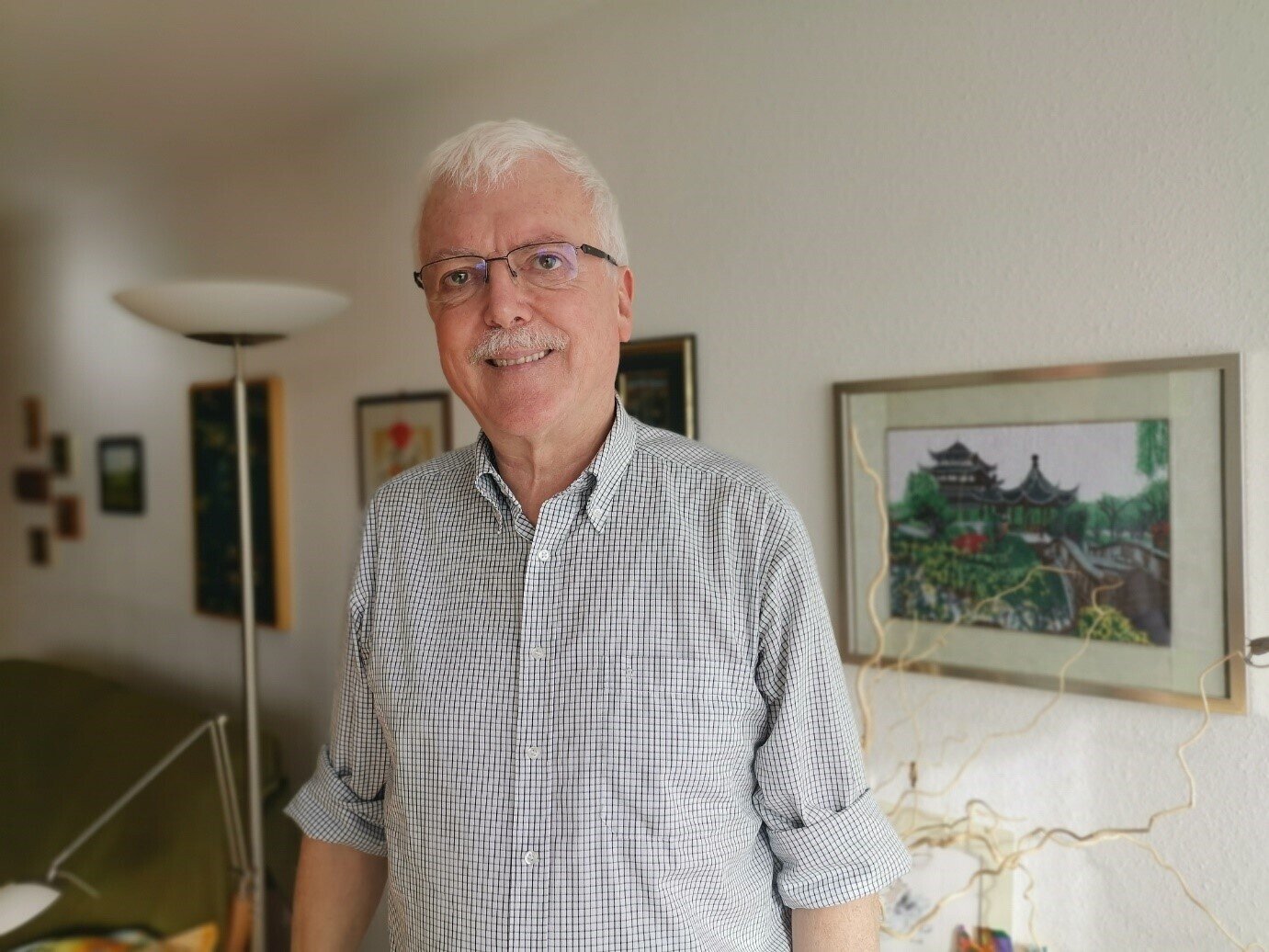 "We have to help other people"

Rüdiger M., born on August 20, 1950 in Sinn, Hessen; has a sister; study of communications technology in Siegen, North-Rhine Westphalia; from 1977 Technical Editor at Bosch in Berlin, from 1989 at AEG Olympia and most recently at Nokia in Ulm; passive partial retirement since 2008, in pension since 2011; married, one daughter.

‘The older I get, the more curious I become,’ says Rüdiger M.. He lives with his wife, who is still working, in a terraced house on the Ulmer Eselsberg. He is relaxed about his coming 70th birthday. ‘It's good as it is.’ On the parquet floor of his study on the first floor there lie heavy black balls. Rüdiger rolled them out of old VHS video tapes. The biggest ball contains more than 60 km of video tape. Being creative is important to him, to engage socially a need.

You stopped working at the age of 58. That's early.
I have made this very consciously. My conviction was: You have to stop when it is still nice. I have seen colleagues who, at the end did not want or could not and have become sad. They have not become any happier later. I didn't know how much pension I'm going to get, but I knew it was enough, because so far in my life I always managed also with little money. 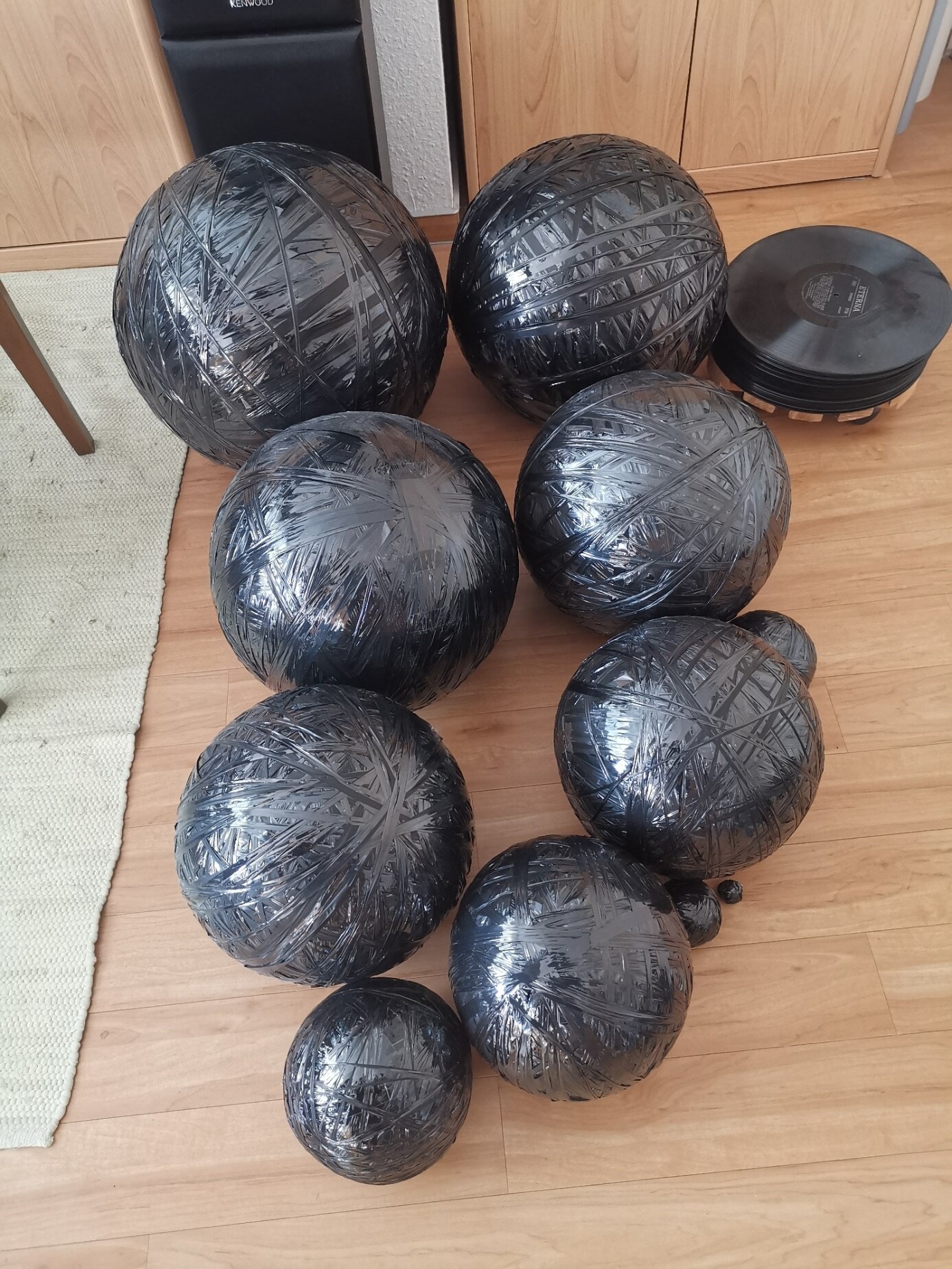 How did you feel in retirement?
I stopped working in July 2008. To start with, I took a little break, the job was not always easy. Then I realized: I have to do something, now I will look for something that I will enjoy and what will be of benefit for the society. In an event of the Zentrums für Allgemeine Wissenschaftliche Weiterbildung/ Centre for General Continuing Academic Education (ZAWiW) at Ulm University in the autumn, I found two themes where I was able to engage — the working group Old-Young that I have participated in for seven years, and the working group ASSIST (Active Partnership and Support of SeniorConsultants for International Students) offering support to foreign, English-speaking master students. I'm still there. In ASSIST, elderly and experienced adults – SeniorConsultants – organize cheap day trips for students, so they can get a better knowledge of Germany. In addition, some of the seniors, also me, offer German conversation lessons, because the students have only little opportunity to speak German. But good knowledge of the German language is necessary if they want to work in Germany. In this way I also try to convey my philosophy.

What philosophy?
Be good to the people, be engaged, even if you don't get any money. Sure, if you need the money, it's something else. I am in a good position. And: A smile as a reward is sometimes a great thing!

You could have been lazing around...
No, I've always been active, early on in the Catholic youth movement, then I volunteered in a political civic action group in Berlin often up to 20 hours per week, for example in the tenant advice. I am politically located rather in the left spectrum.

You call yourself a social person. Where do you think that comes from?
No idea. It's kind of in me.

Which social projects do you still support?
I started at the Ecumenical visiting service, there I visited older people at their home, made driving and emergency services. At the same time, I also had a hard job, but it was for some payment. I have prepared and given one MS sufferer food several times a week — until he died in his mid-40s.

What did that give you?
Social responsibility. I see this need in our ageing society more and more: we must help each other. The state cannot provide everything.
What does your everyday life look like?
On Mondays and Thursdays I go shopping for an older man, this runs over the organization Nachbarschaftshilfe (neighborhood help). On Monday afternoon and on Wednesday, a student visits me for a German conversation lesson for an hour and a half. Monthly, we the ASSIST senior consultants meet to coordinate the of student’ support and every now and then I am at the university in a meeting at the International Office. But I also have a day off now and again. Here I am free to accept spontaneously other appointments 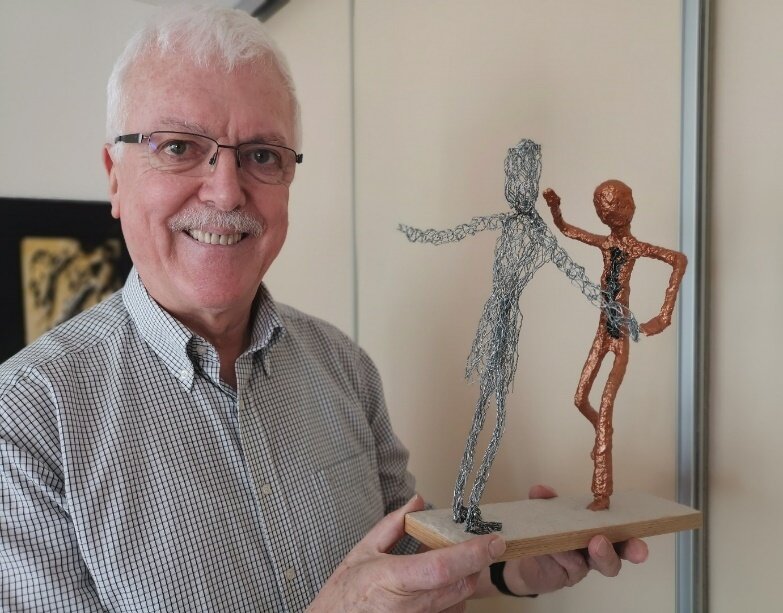 What are you doing then?
Then I make art, for example from cardboard rolls. These roles, for which I have a source, I also provide to kindergartens. I call myself a spontaneous artist.

Do you care about travel?
No. We also travel, but make rather short trips. We have it nice here after all.

Would you call yourself a European?
Of course. I would go even further, to me also other countries are important. I think if you know each other, you don't shoot at each other.

Is Eastern Europe an issue for you?
At the moment I am not engaged in this area. But maybe it will come. I do not want to rule that out. The older I get, the more curious I become.

How come?
Maybe it's related to my socialization. My parents were displaced persons, they had to leave their home. I don't want to say they were yes-persons, but they were afraid because of their status. I grew up in this anxious atmosphere. And I am a war grandson. I also feel trauma. I also became engaged in the refugee issue. What they told about, it touched me so much that I cried. I notice there is still something in me to work on.

What turning points have there been in your life?
Personally a separation, I was 35 when my girlfriend left me after eleven years. It took me a lot of strength to process that. But I have also gained self-confidence from this, I became aware of many things. This has given my life a different direction. As a political turning point, I remember above all, how in 1968 the Soviets invaded Prague. . That was on my 18th birthday. It has touched me a lot because my parents were Sudeten Germans.

What would you advise to younger people?
The world belongs to the brave. Not to see things only negatively, but to identify the opportunities that arise. And to seek help when it is necessary. For example, after my separation I was in a self-help group. You also have to be able to accept help. This is especially important in old age. You have to make sure that there are people around you, who are well-disposed towards you and it is important to know younger people. I have been visiting a 97-year-old woman, who always said: ’What am I still doing here, my friends have all died.' You also have to be active yourself, approach other people openly, even in old age.

Do you have a large circle of friends?
A large circle of acquaintances. Real friends not many, but I also don’t need it. These are then very good friends, so I can tell them everything. But I enjoy knowing a lot of people and also having a chat on the street now an again. The part of the city where a live is “my village”. I feel completely contented. But I can also live my life as I want to. I don't have a boss.

Is there a time you would like to return to?
No, I live in the here and now. I'm super satisfied. Above all, I would no longer like to be a teenager, with all these fears. Today, everything is much easier.

What do you do for your health?
We eat as healthily as possible, my wife cooks excellently, I also a bit. Sport is not my topic, I do a bit of gymnastics for my back, but I'm fine — toi toi toi – good

Is religion an issue for you?
I grew up with Catholic values, they are still ok. But I left the Church at the age of 27. I can’t believe the whole thing with God, I believe in humans.

What media do you use?
I have already developed databases in my job, and I am also now well networked in the social media. But I prefer to read news on paper in the daily newspaper, the TAZ or the magazine Spiegel. The paper rustles, you can mark or cut out something.

What do you want for the future?
I should stay healthy. I will be 70 this year and I'm wondering if I will still manage all that I have been doing, for example in terms of the artistic ideas in my head. But the 70th birthday is not a difficult date for me. It comes as it comes. I am quite relaxed about it. And when the death comes, then comes the death. The main thing is that it doesn't hurt.