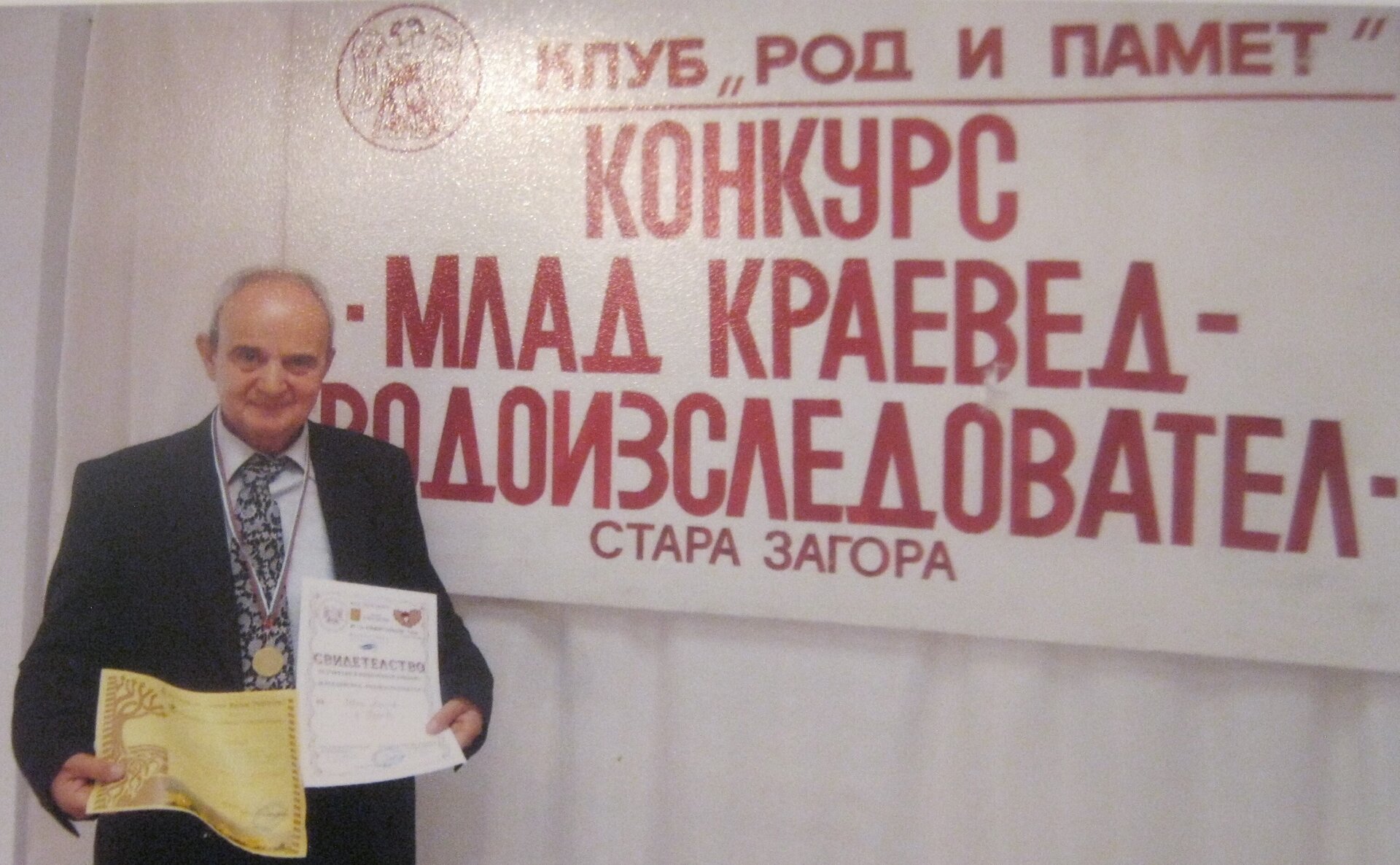 Ivan was born on July 27th, 1950 in Svejen village, Brezovo municipality at the maternity hospital. He was the third child in the family, he had two brothers who had died (one was six months and the other - 12 years old) and another brother who was born in 1958. His father was a priest, born in Svejen who served in his native village from 1942 to 1962 and then moved to Karlovo where he passed away in 1987. His mother was a teacher who worked in Svejen village from 1942 to 1978 and after her retirement she moved to Karlovo, as well.

Back then a lot of people lived in the village. There was a doctor, a nurse, a midwife, a dentist – all positions that the village life required. Ivan studied at the village school from first to seventh grade. Next, he finished eight grade in Karlovo and entered the Mechanical Engineering College in Karlovo which he graduated with excellent gardes in 1969. His two year military service was in Kazanlak and at the end of it he was given the opportunity to prepare for application at the university. Ivan was admitted at the Higher Institute of Mechanical Engineering, Mechanization and Electrification of Agriculture – Russe, where he studied for 5 years at the speciality “Mechanization of Agriculture”.

In his student years he was part of the weightlifting team led by the famous coach Ivan Abadjiev. He met his wife while he was a second year student. She was a student as well at the Institute for Teachers in Russe. At the end of 1973, about seven months after that they got married in his native village.

After his graduation from the Institute, Ivan was appointed at the “Vazovski Mashinostroitelni Zavodi” (VMZ EAD is the biggest enterprise of the military and industrial complex in Bulgaria) in Sopot. The young family lived with his parents in Karlovo till his son was born in 1978, then they moved in small apartment provided by the factory in Sopot. He started work as a fitter of machines and equipment in the bearing production as VMZ consisted of many facotries with different purposes. This business section was located at Karnare unit 18 km away from Karlovo. In fact, Ivan was responsible for the forging-press section which produced blanks for bearing rings on high productive presses Hatebur. Next, he was appointed a Manager of quality department for forging-press workshop for five years. In 1983, at VZM Sopot was created an Institute of Bearings and Bearings units where he worked as a technologist on forging-press process and later was promoted to deputy manager of the department.

There were a lot of seminars, symposiums, field trips within the Organization of Socialists’ Countries Producers of Bearings that Ivan took part with his collegues. They had visited almost all European countries to exchange expereince with other bearing factories for technological processes, equipment and machines. While working at the Institute, he started his studies at Mechano-Electrotechnical Institute in Sofia to become a scientific collaborator (III degree) on forgin-press process and plastic deformation of metals. At that time, there were also opportunities to learn a foregin language, he choose German and was sent to the Techncal University in Varna for six months. In 2000, he became Manager of the Business Unit in Karnare where bearing rings were produced as components of different construction bearings. In 2002, SKF bought the factory in Sopot and he continued to work there till his retirement 13 years later.

Ivan retired in March 2013 but stayed at the request of his superiors for a while to work and train the new comers. Finally, at the end of 2013 he completed his work activity and stared a new life. He has four grandchildren and helps in their up bringing and education. He is quite involved in public activities. For 30-40 years, his parents were collecting and preparing handwritten information in diaries and notebooks about the rich history of their village. Due to financial reasons they were not able to publish the book. When Ivan retired, he started reviewing all the materials, aranging them into chapters – the result is 40 chapters of the book titled “The History of the Village of Adjar - Karadjadat district”. The village was formed immediately after the fall of Bulgaria under Turkish rule by the surviving bolyars of Tarnovo and tsarist soldiers, who, escaped from the sword of the enslavers, sought refuge and reached the lands in the Balkan. The village of Svejen (old name Adjar) was the center of the Karadja-Danish Nahiya (translated into Bulgarian Srednogorska district), comprising of 64 villages. The village had a very rich tradition – there was a cell school, a boys' school, built right after the Aprilov High School in Gabrovo. Many of the people in the village had mastered their crafts and skills in Constantinople – tailors, shoemakers, blacksmiths.

While writing this book, Ivan met many old people, a lot of families, because there are also many volunteers, who participated in the Russian-Turkish war of liberation. That led him to start writing family trees and he showed a small part of them, collected in the form of books. There he covered about 8 generations. He has a folder with draft family trees that await to be published. He is often in Svejen village during the summer, when a lot of students are visting and he enjoys meeting and talking to them about the village history.

In 2018, he took part in the competition in “Genealogy and Local Memory”, organized by the Municipality of Stara Zagora and the club "Family and Memory" and won first place. He was declared a local historian of Bulgaria for that year. In 2019, he made a lot more family trees, participated again and received the same prizes. What is more, his grandson who is named after him – Ivan Philipov Baltov – also entered the competition. He took second place in his age agroup.

His daily life as a retiree is very diverse. His interests in the history of Bulgaria and in his homeland, made him search for and obtain all books published about his village and its neighbouring villages. He met their authors and they became friends – they are in touch and see each other often. Living in Karlovo with his wife, they do not miss the city celebrations, book presentations, theater and opera performances, etc. In addition to other activities, they also help in raising their grandchildren. Their son is having rabbits, chickens and quails, he also is keeping beehives. They are taking care and maintatin the house, yard and garden in Svejen village. Every year with his wife they organize two trips abroad – a short one (duration 6-7 days) and a longer one (14 days). To his estimate they have gone around Europe two times. They also go on one or two day trips around Bulgaria and spent time at the Bulgarian seaside during the summer. When it s possible they take their grandchildren with them. “The money must be spent wisely.” Ivan shared that his and his wife's pension are enough to cover their needs. They even manage to set aside some money for the grandchildren, so they could not complain.

What media are you using at the moment?

He watches a television, regularly following the news though he is not member of any political party. He is daily in contact with relatives and friends via his mobile phone. He has a computer and while working in the bearings factory he used it during the whole day. After retirement he started to prepare for publishing the collected history of the village. The materials left by his parents were on separate sheets of paper, notes in notepads and it took him a lot of efforts and time to complete each chapter. The text was entered and the photo materials were scanned to the computer by himself.

Ivan is satisfied by his material and spiritual gains throught his menaingful life already 70 years. Over the years he came to the conclusion that “without knowedge one can not feel accommplished”.

“One of the roles of retirees is to pass on their knowledge to the younger generations – to their sons, daughters, grandchildren and great-grandchildren. It is good to tell stories and pass on the ancestral memory from generation to generation, but it is even better to have it in written form”.

“To use time consciously, to learn, to create and to have progress, because the years go by, new technologies, machines and production forms emerge and they have to be prepared for that in order to be meaningful citizens of our country.”